August 31 marked the 15th anniversary of Princess Diana's death. Seeing her beloved boys all grown up is a constant reminder of how long she's been gone.

I remember Lady Diana Spencer, the shy teenager catapulted onto a world stage. I remember Princess Diana, the beautiful bride. Followed by the neglected wife, the troubled captive of unfathomable fame and a powerful family. Then there was The People's Princess, the charity crusader and jet setter who was so much fun to watch. Then she was gone. I miss her.

Here's a snapshot of how the world looked 15 years ago when she died in that tragic car crash. 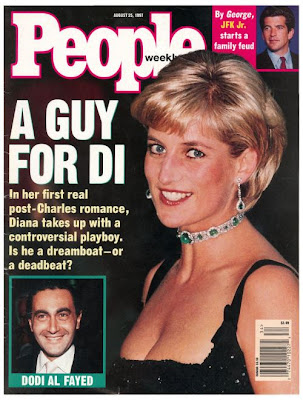 1) Diana and Dodi were big news. She was the world's most popular cover girl, and the week of her death, PEOPLE magazine wondered if Dodi Al Fayed was the "guy for Di."

2) JFK Jr.'s family feud. They may not be the House of Windsor, but the Kennedys as America's Royal Family have sold alot of magazines over the years. In August 1997, John Kennedy Jr. took his cousins to task in an editorial in George magazine, referring to them as "the poster boys for bad behavior." At the time, Joseph Kennedy II was running for governor and apparently bullying his first wife into a politically expedient annulment. Joe's brother Michael Kennedy was embroiled in a cheating scandal with a 16-year-old babysitter. Joe responded to John by telling the press, "Ask not what you can do for your cousin, ask what you can do to sell magazines." 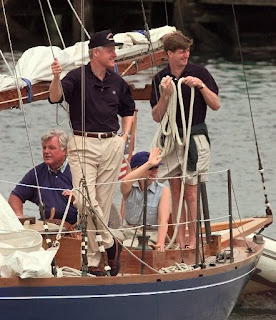 3) The President and First Lady were on vacation in Martha's Vineyard. In more positive Kennedy news, Ted and Patrick Kennedy played host to Bill and Hillary Clinton, who spent that week sailing, golfing and attending cook outs.

4) "The Death of Privacy." TIME devoted its cover story to how the advent of the internet and ATM led to information gathering on consumers. Ironic, when you consider that Diana's lack of privacy had paparazzi chasing her through the streets of Paris that last night of her life.

5) Brad Pitt was having some privacy issues of his own. Playgirl published nude paparazzi shots of the hunk, front and back.

6) Air Force One was in theaters. And Harrison Ford was our #1 action hero.

7) Remembering Elvis. August 1997 was the 20th anniversary of The King's death, and it was observed by a month of magazine covers and TV specials.


8) Steve Jobs and Bill Gates made a deal. In August 1997, they announced Microsoft Office would become available for Macs.

9) We were all listening to The Spice Girls, whether we wanted to or not. They were all over the radio and in August, began filming Spice World. (Girl Power!)

10) The Beanie Baby craze was in full swing. People waited in lines to get new ones on the day they were introduced, and collectors scrambled to buy their favorites once they were retired. 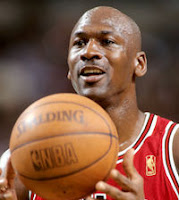 11) Michael Jordan was the world's dominant athlete. The buzz was whether he could lead the Bulls to a championship three-peat. (He so did.)

12) The Cubs' Sammy Sosa hit his 200th homerun. In that more innocent summer, there was only a whisper of juicing.

13) Tyra for Victoria's Secret. Today Tyra Banks is a media mogul. 15 years ago this summer, she was known for gracing the fall lingerie catalog cover.

My modem has been operating in fits and starts, so this will be brief.

My mom is going to be okay. YEA! She's out of ICU and in her own room.

Back home and tomorrow it's back to work. I'll post more then. (On an internet connection I can actually trust for more than a minute!)