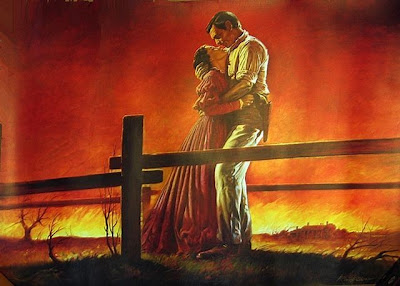 Ten Great Oscar-Losing Performances. Part of the fun of watching the Oscars is slapping your forehead when a winner is announced and proclaiming, "How COULD they?" Looking over past Oscar races, here are 10 times the Academy got it wrong.

1) Tom Hanks. Capt. Miller. Saving Private Ryan. (1998) Less showy than his work in Forrest Gump or Philadelphia, but more moving and relateable. Miller was a hero only because he was there. You could tell that Hanks' character had lived an unremarkable life until then, and WWII was fought and won by a generation of such unremarkable men. They saved the world, and Tom Hanks represents them admirably and memorably. Who won that year instead? The obnoxious Roberto Benigni. If Hanks' Captain Miller could see Benigni's performance, I bet he'd be sorry his side won.

2) Peter Fonda. Ulee's Gold. (1997) Another quiet performance, another man trying to do the right thing by his family. Ulee is a bee-keeper who is raising his granddaughter, determined to do a better job this time than he did with his son. If you haven't seen this movie, you should. Fonda is a revelation. The only other actor I could imagine bringing so much integrity to this role is that other Fonda, Henry. Who won that year instead? Jack Nicholson, romancing an unrealistically and distractingly younger woman and chewing the scenery (even as he uses his plastic knife and fork) in As Good as It Gets.

3) Robert Downey, Jr. Chaplin. (1992). Why did Hollywood keep giving Robert Downey chance after chance to redeem himself in the 1990s? Because producers and directors saw this movie. He disappeared into the role of one of the screen's first geniuses. He, like Chaplin, moved like a dancer. He is completely believable as he pugnaciously fights his personal demons, as Chaplin did. He ages but without condescension. It's a virtuoso piece of work. Who won that year instead? Al Pacino in Scent of a Woman. Hoo-ha! It wasn't a bad performance, it just wasn't anywhere Pacino's best. It was simply Al's turn.

4) Richard Burton. George. Who's Afraid of Virginia Woolf? (1965). Quiet, smart and ferociously angry. Burton applies his unmatched vocal prowess to Edward Albee's brilliant dialog and was consistently fabulous. Who else could be so threatening while wearing a lumpy sweater and reading glasses? Who won that year instead? Paul Scofield, being all actor-y all over the place in A Man for All Seasons.

5) Clark Gable. Rhett Butler. Gone with the Wind. (1939) No, really. Gable won an Oscar, but not for his greatest role ... arguably the most recognized screen character of all time. The out-front, uncompromising masculinity he brings to the part enables him to make Rhett a three-dimensional hero, showing us a tearful Rhett, a sensitive and loving Rhett, an ironic Rhett who is even ashamed of his heroism. I will always be a little in love with Rhett Butler. Who won that year instead? Robert Donat in Goodbye, Mr. Chips. A fine performance. I get it. I just would have gone with Gable, and I think history and culture prove me right.

NOW FOR THE LADIES
6) Kate Winslet. Rose. Titanic. (1998). To borrow from Donna Summer, she works hard for the money. She's in almost every scene of this epic: snarling, seducing, splashing, ax-swinging, shouting and almost dying. And she goes from being a feisty caged bird to an independent woman. Plus, her Rose is like Gable's Rhett. When Winslet is an old lady, introduced as "Oscar winner," everyone will assume it's for this mammoth crowd pleaser. Who won that year instead? Helen Hunt for As Good as It Gets. Bleh. BFD.

7) Mary Tyler Moore. Beth Jarrett. Ordinary People. (1980). Inspired casting. Yes, everyone thought of Mary as a perfect comedienne, but director Redford realized that "perfect" was the operative word. Beth had to be believable as the envy of the neighborhood from outside, loved and admired by all who didn't know her well; and at the same time, tortured on the inside. Unable to truly love, forgive or evolve. In anyone else's hands, Beth Jarrett would have been a villain. As she is here, she's the object of our pity. Who won that year instead? Sissy Spacek in Coal Miner's Daughter. She was great, too, but this was such a stretch for our Mary. Besides, if I ran things, Sissy would have won for wearing pig's blood better than anyone else in film history.

8) Sissy Spacek. Carrie. (1976) Could ANYONE ELSE have captured our hearts as a telekinetic mass murderer? I rest my case. It may be a weird but true observation that Stephen King and Woody Allen have created some of our most sympathetic and compelling female screen characters. I suppose that when you realize she's the only actress ever to be nominated for a straight-on horror flick, her nomination really was award enough. Who won that year instead? Faye Dunaway's noisy, cartoonish careerwoman-shrew from Network.

9) Barbra Streisand. Katie Morosky. The Way We Were. (1973). She's too-too. Too loud, too brazen, too opinionated, too ... unattractive. (There, I said it.) And too vulnerable to be like this and still be content in our world. I ached with her every moment of this movie. Who won that year instead? Glenda Jackson's charming but lightweight performance in A Touch of Class.

10) Judy Garland. Vicki Lester. A Star Is Born. (1954). As if giving us "The Man that Got Away" wasn't enough, she also dances and romances and cries and even gets slugged in the face. Like Kate Winslet in Titanic,

she deserved it just for the effort! How could such a tiny woman give such a towering performance? Who won that year instead? Grace Kelly for wearing glasses and a cardigan in The Country Girl. OK, that was unfair because Grace Kelly is very good in The Country Girl. But COME ON! Judy sang "Swanee" and danced with a cane! WHAT DOES IT TAKE TO PLEASE YOU PEOPLE?

My best friend could have written this, for he chose the safer harbors of his heart.