The "Isn't She Lovely?" Edition:
THIRTEEN THINGS ABOUT PRINCESS GRACE

Tuesday night my classic movie group watched Dial M for Murder. Later this summer, we've got Rear Window and To Catch a Thief on tap. All three movies starred Hitchcock's favorite leading lady, Grace Kelly. Consequently I have been giving some thought to the iconic blonde who won an Oscar and turned her back on Hollywood to become Her Serene Highness, Princess Grace. 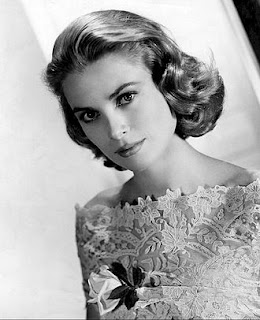 1) Grace Patricia Kelly was born in Philadelphia to John and Margaret Kelly. The family was prominent, since her father was an Olympic Gold Medalist and served as FDR's Director of Physical Fitness.

2) Looking at her, it's hard to believe that within the Kelly clan, her older sister Peggy was considered "the pretty one." Yet that's what Grace told interviewers, and her father unapologetically confirmed it.

3) As a student at a conservative all-girl Catholic high school, she modeled at charity fashion shows and discovered she enjoyed the attention. It was then that she began to consider a life on stage. Her parents were emphatically against it, with John Kelly calling actresses "just a slim cut above street walkers."

4) Still, upon graduation, she went to New York to study acting. It was an uncharacteristic act of rebellion against her strong-willed parents, but she did it with the complete support of the Kelly family black sheep, her playwright uncle, George Kelly.

5) She found early success in New York not onstage but on television. Her small parts in TV dramas and on commercials got her noticed by casting agents in Hollywood. Her big break came as Gary Cooper's young Quaker bride in High Noon. 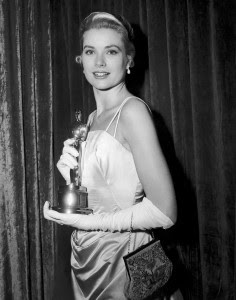 6) She made just 11 movies, but every one of them was prestigious. She worked with the best directors, writers and fellow actors. Director John Ford credited her inherent "breeding, quality and class" for the way she commanded respect on screen. She was twice nominated for an Oscar and won the coveted statuette in 1954 for The Country Girl.

7) For such a beautiful and successful woman, Grace Kelly was surprisingly unlucky at love. Biographers agree that once she got to Hollywood, she fell into ill-advised on-set relationships with her leading men, most of whom were older (Clark Gable) or both older and married (Bing Crosby, Ray Milland, Gary Cooper). This reportedly left her disillusioned.

8) So when Prince Rainier III began wooing her, she was intrigued and receptive. He was age appropriate, sophisticated, and from a completely different milieu than the Philadelphia Mainline families and Hollywood entertainment types that had surrounded Grace. Rainier Louis Henri Maxence Bertrand Grimaldi received his education in England, Switzerland and France, was decorated for heroism during WWII and returned to Monaco to become its sovereign prince … all before his 27th birthday.

9) In April, 1956, Grace Kelly became her Serene Highness, Princess Grace of Monaco. She never made another movie, though Hitchcock tried to coax her out of retirement by promising her the lead, opposite Sean Connery, in Marnie. When she refused, the part went to Tippi Hedren. In the mid 1970s, director Herbert Ross offered her the lead in The Turning Point. Since she had given up acting to be a princess and mother, Ross thought she could relate to the role of Didi, who gave up the big city and professional ballet for family life in Oklahoma City. Herbert Ross was no more successful than Hitchcock had been, and the part of Didi was played by Shirley MacLaine.

10) Together Grace and Rainier had three children, Princess Caroline, Prince Albert II (who currently sits on the throne) and Princess Stephanie. 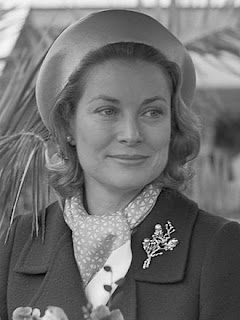 11) Princess Grace is remembered by Monegasqes for more than just glamor.

•  She founded AMADE Mondial, a  charity so successful in helping underprivileged children throughout the world that it was recognized by the United Nations. Today, her oldest daughter Princess Caroline continues her work with the organization.

•  She was also an outspoken advocate and fundraiser for the La Leche League and was dedicated to helping young mothers understand the benefits of breast feeding.

12) When Lady Di had a difficult time adjusting to her role as Princess of Wales, Grace reached out to her with support and counsel. This photograph was taken the night they met, and they continued to correspond until the end of Grace's life. 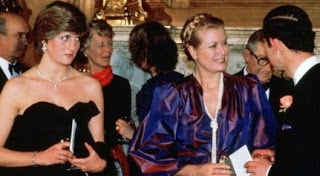 13) In 1982, she had a stroke. She was driving herself and daughter Stephanie through the French countryside when she was stricken and lost control of the vehicle. Stephanie survived the crash but Princess Grace died at age 52.