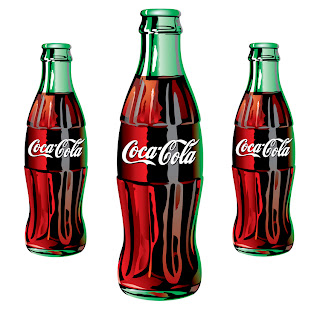 You know it. Everyone does.
In 2011 it was declared the most valuable brand on the planet.
And it's always my drink of choice.

1) Coca Cola is America's best-known export, sold in every country in the world except Cuba and North Korea.

2) It was invented by an Atlanta pharmacist in the late 1800s who believed that his carbonated soda/syrup mix had "energizing" medicinal purposes (it was whispered to be a remedy for impotence) and could cure headaches.

3) Once the pharmacist sold the formula, it was marketed as a soft drink. The first ad ran in the Atlanta Journal, declaring it: "Delicious. Refreshing. Exhilarating. Invigorating."

4) Coca Cola memorabilia from that era is prized among collectors. Recently a 19th century antique clock with the logo was auctioned for nearly $100,000.

7) Coca-Cola, the logo, the name Coke and the shape of the bottle are all trademarked

9) In 1951, a little known actress named Marilyn Monroe made a Coke commercial with Jack Paar as part of a promotion for their movie, Love Nest.

12) Early in his career, Republican Presidential candidate Herman Cain worked for Coca-Cola as chauffeur to the company president.

13) A large portion of Coca Cola's business -- both nationally and internationally -- comes from their long relationship with another well-known brand: McDonald's.