1) This song is about a woman who has moved a lot and is always packing boxes. Do you have packing materials (boxes, bubble wrap, packing tape, etc.) in your home right now? Do you have them on hand to ship things, or are you preparing for a move? I save padded envelopes, boxes and bubblewrap to send things to friends. My collection of these items is far greater than my need for them. That's why my home is so overstuffed.
2) She sings that she moves from place to place, collecting memories. Would you rather travel light and travel often, or put down roots? Put down roots.

3) She can recall all the gates and house numbers of all the places she's lived. Does your current residence have a fence and gate? Did your previous one? I haven't lived in a home with a fence or gate since I left my parents' house about 200 years ago.

4) This week's artist, Alice Merton, moved often as a child as her father's job took the family from Germany to the US to Canada to England back to Germany ... She wrote this song to help her deal with feelings of loneliness and longing. When you're feeling overwhelmed, how do you work through the feelings? I write. I call my friends. I cuddle my cats. 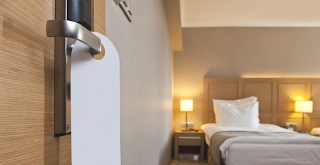 5) Alice is still on the move. Soon she'll be performing throughout Europe. Have you ever had a job that required you to travel? If yes, did you enjoy it? Business travel doesn't bother me. I prefer to arrive the night before so I don't have to stress over making the meeting on time, but as companies get cheaper they're more reluctant to spring for those hotel rooms. Too bad. I like hotel rooms. The little soaps! The pillows! The big screen TVs! The wake up calls!
6) "No Roots" is a favorite of Kelly Clarkson's, who has performed it on tour and on TV. When you think of Kelly, is at as a singer, a judge on The Voice, or as a talk show host? I like her best as a singer. Here she is from Season 1 of American Idol. What a charmer!
7) In 2017, when this song was popular, Faye Dunaway made Oscar history by announcing the wrong winner for the biggest award of the night, Best Picture. It wasn't her fault as she was given the wrong envelope, but she's one who made the on-screen flub seen around the world. Have you recently had an embarrassing moment? I had gut trouble last month when my oldest friend and I were sharing a bathroom. That was pretty mortifying. Fortunately I've known her since Kindergarten. I've seen her through some embarrassing moments, too.
8) Wonder Woman was 2017's most popular movie. She was originally introduced in a 1941 DC comic book. Comic books remain a big business. Have you ever been to a comic book store? I've walk past one regularly but I have never been tempted to go in.

9) Random question: Is your skin itchy this morning? Nope. Ask me again in the winter. I guarantee my answer will be different.

So proud of Chicago's very own 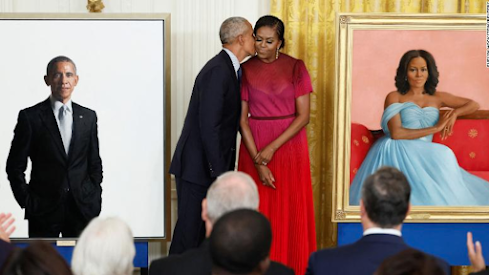 The Obamas finally got to unveil their official White House portraits, and I'm popping my buttons with pride and joy. As we watch the Brits say farewell to Queen Elizabeth, I find myself clinging more tightly to our graceful traditions and norms. Donald Trump, petulant fuck that he is, denied the Obamas this ceremony. Joe Biden hosted his old boss instead, and I'm swooning.

They are Chicagoans, and they represent the best of my city. The biracial son of a working mom and the descendant of slaves who earned Ivy League degrees, found each other, and made history. As Michelle herself said, "A girl like me, she was never supposed to be up there next to Jacqueline Kennedy and Dolley Madison." Well, now she is, and the Obamas are an example to every little kid in America. If you work hard, you too can achieve great things!

And, since Michelle mentioned JBKO, let's look at how the Kennedys' White House portraits were unveiled. It demonstrates how important the unveiling ceremony is historically, and how civil we as a people can be.

Once Jacqueline Kennedy left the White House in December, 1963, just weeks after her husband's murder, she only returned once. For the unveiling of their presidential portraits.

Richard Nixon was President when the paintings were finally completed in 1971. He could have gotten quite a bit of political mileage out of Jackie's return. By now, she was Jackie O, and everything she did was news.

Instead, the Nixons did something unexpected and beautiful. They invited Jackie and her children to come back "home" in secret. The two families -- the Nixons and their adult daughters, Jackie with 13-year-old Caroline and 10-year-old John -- had dinner together in the private residence. Caroline got to see her old classroom (The Kennedys had a Kindergarten onsite in the White House Solarium for Caroline and 19 other children). Then they viewed the portraits.

It gave Jackie an opportunity to come back to the White House quietly, away from the prying eyes and cameras that recorded her when she and her children left. It gave the children a chance to revisit the last place they lived with their father, and helped them understand how important their parents had been to the country.

No official photos of the evening were taken. The media received a press release the next day, after JFK's widow and children were back in New York. Here is Nixon's official diary entry for the event. 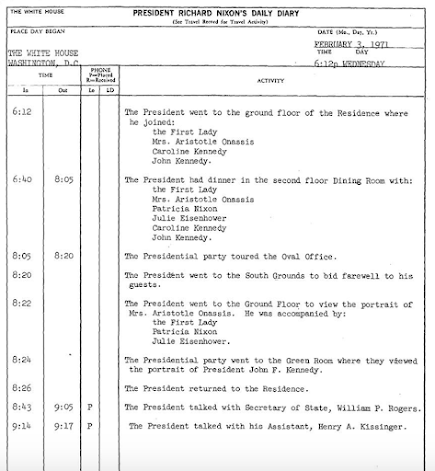