How'd we ever get this way?

What a fascinating time capsule this is! And how very relevant to today.

Listening to JFK field questions from Walter Cronkite about race, domestic politics, the economy and America's place on the world stage, it hits you that these subjects are on Donald J. Trump's plate today. Only he never responds with a modicum of the grace and dignity Kennedy unfailingly displays.

•  George Wallace resisted the Kennedy DOJ's order to segregate Alabama schools. In discussing this very important issue, JFK never speaks Wallace's name. He talks about his immediate actions and next steps. Imagine that! He had an adversary that he could have engaged with in the media, but simply chose not to.

•  When asked if his stand on civil rights would cost him Southern votes in 1964, Kennedy concedes it will. He also expressed hope that the GOP would join him in ensuring equal opportunities for all. He doesn't demonize those who would vote against him. He doesn't call them "unAmerican." Nor does he call the rioters in Louisiana "thugs." He just reiterates where he stands on civil rights and why.

•  He refused to speak the names of those lining up to run against him in 1964, saying he would leave choosing a Republican candidate to the Republicans. I believe in early autumn 1963, the list included Gov. Nelson Rockefeller, Gov. George Romney and Sen. Barry Goldwater. Somehow he managed to refrain from dubbing them "Crooked Nelson," "Sleepy George" and "Lyin' Barry."

•  Listen to how Kennedy responds when Cronkite asks him what he would say to the millions of unemployed Americans who have nothing to celebrate on Labor Day. He honestly says there's no "magic action" he can take. He discusses young people entering the job market without sufficient education, and those who have lost their coal/steel jobs and need to be retrained.

Now recall how Donald Trump responded to Peter Alexander's question about the corona virus. "What do you say to Americans who are scared?" "I say you're a very bad reporter," our President said. "I think it's a nasty question."

•  Asked about his predecessor's criticism of his foreign policy, Kennedy said if the "treaty is not substantial enough to withstand discussion or debate, it's not a very good treaty." He didn't call for Eisenhower to be investigated by Congress. He doesn't question Eisenhower's motives or patriotism. Now think about any exchange you've heard Donald Trump have about Barack Obama. You know, the guy whose portrait he won't even allow to be unveiled.

•  Walter Cronkite tosses one right across the plate, asking Kennedy how he feels about French President DeGaulle "sniping" at Kennedy's Vietnam policy. "Sniping" was Cronkite's word. Instead of taking a swing, the President keeps his cool, referring to DeGaulle as a man "of great stature," and "a candid friend" of the United States. Today our President Trump personally attacks allies who criticize his policies (Merkel, Trudeau), all the while cozying up to our enemies (Putin, Erdewan).

It breaks my heart, how Donald Trump has debased the office of the Presidency. It wasn't always this way. It doesn't have to be this way. Here's proof!

I hope that Joe Biden can restore a sense of civility and calm to the Presidency.

Tipping tuckers me out 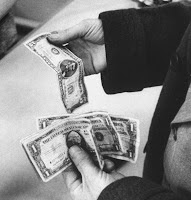 Yesterday, one guy delivered and installed two air conditioners. He did it alone on a hot day. He worked quickly and efficiently. I appreciated his efforts and showed my gratitude with $15 and a small bottle of cold water.

It's over and done and I'm glad I did it. But tipping appliance/furniture delivery men still befuddles me.

•  My niece, who works for a high-end appliance retailer in Michigan, told me that her delivery staff doesn't expect gratuities. She said that she checks Yelp and Google reviews and if any of the deliveries are singled out as a positive experience, or if someone calls and mentions their delivery, her company will make sure they get a bonus in their checks at the end of the month.

•  My friend Nancy told me she always slips each guy $10 because they're doing hard work that she doesn't want to/can't do herself.

•  My aunt in Florida tells me that her husband has forbidden her tipping unless the weather is over 100º. He used to do deliveries on weekends when he was younger, and insists it's the store's responsibility to pay their staff, not the customer's.

•  My oldest friend buys $5 Dunkin or Subway gift cards and tells the delivery guys to have lunch or a cup of coffee on her.

What about you? Would you slip some cash to the delivery man/installer? Or would you expect the appliance store to do it?

And why, oh why, can't we have an established, published set of rules for tipping? I'd be ever so grateful!