This performance of "Battle Hymn of the Republic" is from Robert Kennedy's funeral. So this week, we focus on him.

1) During WWII, when he was just 17, Robert Kennedy enlisted in the Navy. He was disappointed he was never involved in combat. Tell us about a time when you felt fate/circumstances kept you from something you wanted. First of all, I think it's a good thing that Bobby didn't see combat. I mean, consider his poor mom and dad! His parents had already lost their oldest son and their son-in-law in that war, and their second oldest boy (the future President) had his health severely compromised in the Pacific. They also serve who ride desks, Bobby.

OK, now to answer the question at hand: I used to think I wanted to marry the guy I spent my 20s with. I even daydreamed about what we'd name our first child (a girl). But that relationship was tempestuous at best, ugly at worst, and I'm always glad I didn't get what I then wanted. I think of that whenever I hear the Garth Brooks song, "Unanswered Prayers."

2) Bobby was trained as an altar boy and throughout his life regularly attended early morning mass. When is the last time you attended a worship service? It's been awhile. But I want to go this Sunday. I pray often, but sometimes it feels important to me to do it in a sacred place.

3) He may have been an altar boy, but he was no angel. During junior high he was suspended for punching a classmate. Who is the last person who made you very, very mad? My pervy old neighbor Walt, whose attention to me is most unwelcome. I have a right to relax in my own home, and it's hard knowing that at any moment he could rap at my door or slip another note into my morning newspaper. EW! ICK!

4) He had his first date when he was a senior in high school. Looking back, Mary Bailey Gimble told Kennedy biographers that she knew he had a crush on her and wondered why it took him so long to ask her out. Tell us about one of your early crushes. When I was very young -- maybe 4 years old -- our neighbors were a very friendly couple named Bill and Mary. Every few weeks, their grown son, Billy, would come home to do his laundry in their washer/dryer and wash his car in their driveway. I loooooooved him. He had shiny black hair and always wore black t-shirts in summer when he sudsed up his machine. He would give me the honor of washing his hubcaps, and would tell me that I was such a "happy helpmate" that he wanted to marry me someday. I believed him. Consequently I was furious when I was forced to attend his wedding to some hairsprayed bitch named Sandy. To her dying day, my mother loved telling the story about how sullen and angry I was all that day because the bride had stolen "my husband."

5) Bobby's wife Ethel is as bubbly and talkative as he was introspective and shy. He was organized, she's messy. While opposites may attract, do you believe the happiest marriages are between partners who are more similar than different? Oh hell, I don't know. I'm terrible at the relationship thing. Maybe because Billy dumped me and ruined me for all other men. 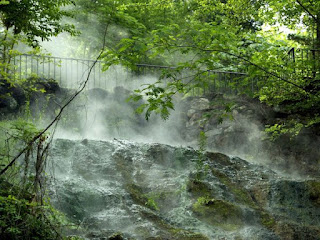 6) By November 1960, when he was 35 years old, Bobby already had served as legal counsel to two Senate committees and run his brother's successful Presidential campaign. He was looking forward to a quieter life teaching law but gave in to family pressure to become President Kennedy's Attorney General. Tell us about a time when you were at a crossroads. Who influenced your decision? I couldn't decide whether or not to buy a place. I knew it made sense financially, but I was scared. That's a lot of money to plunk down all at once. And the phrase, "30 year mortgage" almost gave me hives. So I went off by myself for a long weekend. I wandered around Hot Springs National Park and let the natural beauty clear my head. When I got home, I called a realtor. So I suppose Mother Nature influenced me.

7) In 1777, Colonists celebrated July 4 with the firing of cannons and muskets, followed by a public reading of the Declaration of Independence. What is your neighborhood doing to observe the day? There's a parade in the morning and fireworks at dusk.

8) The Revolutionary War still raged during that summer of 1777. General George Washington allowed his soldiers to celebrate with a double ration of run on July 4. Do you know anyone who is serving in the military this 4th of July? My oldest nephew is in the Navy, assigned to The Nimitz.

9) Celebrity chef Rachael Ray says she considers mini-hamburgers, or "sliders," the All-American food. What will you be eating this 4th of July? There's a salmon filet in the freezer. It would taste so good grilled and smothered in barbecue sauce. 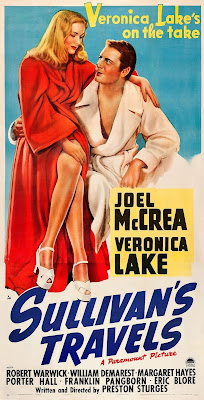 Sullivan's Travels is one of those classics that I've always wanted to see but somehow have kept missing. It's often referenced as Preston Sturges' signature film, his masterpiece. The AFI included it on their list of greatest films of all time. I knew the Cohen Brothers had developed their crazy popular O Brother, Where Art Thou as an homage to Sturges and this film.

Finally saw it this past week with my movie group.I  was unprepared for how dark this comedy got.

To those of you who, like me until Tuesday, are unfamiliar with the movie, here's the bare bones of the plot. Sullivan is the handsome young director of very popular comedies during the Depression. He yearns to do more serious work, dramas that will reflect the human condition in this country during hard times.

But, he decides, life by the pool in Beverly Hills is just too cushy. He can't portray the lives of the poor with any sensitivity until he moves among them. So he dresses up like a hobo (complete with bandana on the end of a stick) and begins to hitch across country. Maybe hop a freight or two.

The movie studio decides this is a delicious story for the fan magazines and sends a luxury bus after him, complete with shower and kitchen, for the publicist and secretary and studio executive that are taking down his every movement. Sullivan keeps trying to ditch them and not only keeps failing, he keeps ending up back in Los Angeles, as though the cushy life is somehow his fate. This part of the movie was biting and funny. I especially liked when Sullivan's butler tried to convince him that this was a wrong-headed, even offensive, pursuit. The "poor and needy" will likely consider Sullivan's adventure "as an invasion of their privacy, and quite rightly." But Sullivan is insistent.

One thing leads to another, as it will in these movies, and Sullivan ends up accepting the gift of ham and eggs at a Los Angeles (again!) diner from a failed actress who is only a little better off than he pretends to be. She's reconciled that her career is never going to happen and she's about to begin hitching rides back home to the Midwest.

Sullivan is so touched by her generosity that he admits who he is and promises to help her get a start in the movies. But he's also still committed to taking time off to see how the other half lives. She worries that he's so guileless and insists on going along.

Now the movie gets dark and never really lightens up much. There are soup kitchens, homeless shelters and even a chain gang.

It was well made, well acted and made me think. I appreciate all that, so I guess you could say I appreciated Sullivan's Travels.

But don't tell me a movie is a madcap comedy and then make me confront murder and deprivation and beatings and starvation and desperation. I was unprepared for the intensity, and wasn't in a good place emotionally to receive the message.

You wouldn't know it to look at us 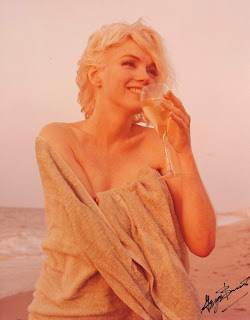 Me and Marilyn. Marilyn and me. We do indeed have something in common.

I was so sad and rattled when I got home from work last night. I have so much on my mind these days. I just couldn't unwind. I made myself a screwdriver and felt nothing. I went to bed early -- about 10:00 -- right after the Cubs fell to the (hiss!) Mets.

I drifted away slowly and woke up with a start at about 3:00 AM. Reynaldo heard me and decided it was time for breakfast. When I disagreed, he began knocking things off my dresser. We compromised by me giving him and Connie a snack. So I'm in the kitchen and I'm very, very awake.

Not refreshed or relaxed. Just awake.

I tended a few Farmville crops and could still feel my heart beating out of my pajama top.

So I popped a Xanax.

I woke up naturally at about 10:00 AM. I never sleep that late! And I felt great. A little frustrated because I was going to both do laundry at the washeteria and head over to the vet today and there just wasn't time.

But I was amazed by how good I felt this morning when I finally awoke. I can see how people can fall into the habit of including a tranquilizer of some sort at bedtime.