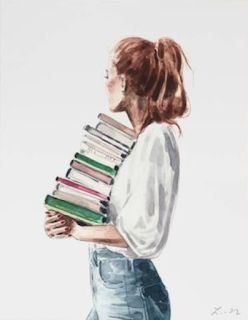 1. What are you currently reading? The Couple Next Door by Shari Lapena. Anne and Marco are invited to dinner by the couple next door. At the last moment, their babysitter cancels. Anne wants to stay home with their 6-month-old daughter, but Marco insists they go anyway. It's just next door! Theirs is a row house, they share a wall with their neighbors so they couldn't be any closer. They have a baby monitor so they can hear every noise the baby makes. If little Cora needs them, they can be home in less than two minutes. What could go wrong?

This one has lots of twists and turns and is keeping me guessing. Plus, there are a lot of odious people populating these 335 pages. Det. Rasbach and poor Baby Cora are the only characters I like. Everyone else is a suspect! Yes, it's got me hooked.

2. What did you recently finish reading? The Patriarch: The Remarkable Life and Turbulent Times of Joseph P. Kennedy by David Nasaw. Old Joe Kennedy saw an awful lot of life on his way to creating a political dynasty. WWI, the Spanish flu epidemic, the advent of talking films, the Depression, WWII ... These events shaped him and, more than once, he had an impact on his times. I learned a great deal about America as I read about clan's patriarch.

He married the only girl he set his cap for, the girl he started seeing when they were both in their teens, and took her along on his journey to fame and success. Oh yeah, there is no indication that he was ever faithful to her. He was a Vatican insider who met with Popes and conferred with Cardinals and never missed mass, yet didn't hesitate to break a Commandment or two if it suited him. He was an involved and loving father who lobotomized his oldest daughter.

It's during WWII that the hits just start coming. First his second son (the future President) is presumed dead after the Japanese sank his boat. Then his Naval aviator oldest son is killed in a plane crash. Then the oldest daughter's operation goes very, very wrong. Then his son-in-law is killed in action. Then the second daughter dies in a (civilian) plane crash. All within six years.

Twenty years later, between 1963 and 1969, he saw two sons murdered, a third involved first in a near-fatal plane crash and then in an infamous and scandalous car accident. By now, Joe was debilitated, the victim of a massive stroke.

If I didn't know all these events truly happened, and that Joe Kennedy was at the center of them all, I'd think this was the plot of a Lifetime movie. I enjoyed this book, for all the highs and lows, and wish I'd known Joe Kennedy. He is fascinating.

3. What will you read next? Written in Blood by Diane Fanning. In 2001, Vietnam vet, author and political gadfly Michael Petersen calls 911. His wife, Kathleen, is dead at the foot of the basement stairs. He insists she fell after too many glasses of wine and hit her head on each step on the way down. The police don't believe this for a moment.

I watched Petersen's trial almost daily in 2003. I've wanted to revisit it ever since I heard Colin Firth was going to play Petersen in an upcoming HBO mini-series.