Connie and I went to the vet this morning. Her erratic litter box habits were our primary topic of conversation. I was grateful that neither the vet nor the tech laughed when I pulled out the defecation diary I have kept since our last visit. With a combination of Miralax and pureed pumpkin, her litter box habits are now normal and healthy. Since that's been solved, we can move onto her other end and make plans for her dental work. 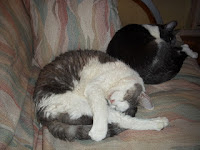 Then I think I have to seriously consider another cat. Connie came to me from a hoarder situation. She was one of more than a dozen cats in a small apartment. When she arrived here, she was one of three cats in a 2BR condo. She bonded instantly to Joey, my big old tomcat. The size disparity amused me, and her sweetness and affection for The Big Guy was touching. After a little less than two years, Joey died and it was her and Reynaldo. Rey acquiesced when she groomed him and, until his health began to decline this summer, they would race up and down the hall together.

Now it's just her and me. She has become more affectionate with me and keeps closer tabs on me now than she did before. I worry about what happens to her after I return to the office on November 1. Never in her life has she been the sole living thing in an abode. I'm afraid she'll be scared, unhappy, stressed.

So in November I predict a trip to a local shelter, returning with a companion for my girlcat. Yes, I'm getting a pet for my pet.

Let me translate for you. "My husband is crazy."

When she is on her deathbed, she can luxuriate in the time she saved by shaving off those two syllables.