Love, to you.
Define love in your own words. When the person I think of first thing in the morning is the same one I'm thinking about when I close my eyes at night. Or, to borrow from Broadway ...


What do you want in a relationship? A genuine connection on many levels -- spiritual, physical and intellectual

Currently.....
Do you have a Valentine? Nope
If not, are you happy being single? Sure
Describe the perfect V-day date in your opinion:
Dream Date? Movie and dinner
What is your crush's name? Adam :)
Do you believe in love at first sight? "Yes, I'm certain that it happens all the time." Now aren't you supposed to ask me what I see when I turn out the light? "I can't tell you, but I know it's mine."

This or that
Chocolates or Flowers....you must pick one! Flowers
A short kiss or a big hug? Hug
Cute and dimwitted, or Average and brilliant? Julie speaks for me ...


Miscellaneous
Turn-ons? Confidence and competence
Turn-offs? Right wing nut jobs
What thing should a guy never say to you? "Obama is a socialist"
How do you feel about kissing on the first date? Dates without kissing are also known as nights out with the girls. I want all the physical affection I can get.

A boy and his appetite

Dear Lord, my nephew can eat! Now a freshman in high school, he's tall and thin as a rail and always, always hungry. It's as though his appetite is a motor roaring inside of him.


We met for lunch today and he had three slices of thin crust pizza, an order of fries and three mini candy bars.* He practically inhaled all of it. I was stunned.

He's also growing a beard. A straggly, awful looking thing. He seems quite proud of it.

He's also still completely into his classes. He loves high school so much and it's all about the learning, not the grades. I know from my sister that he's been on the honor roll, but he never mentioned his marks once today. He wants to be a middle school or high school history teacher. He admits that he and his classmates can be jerks, but confesses he has no interest in or tolerance for little kids. Besides, he really appreciates the influence one of his junior high teachers had on him and wants to pay it forward.

Oh! And he's recently discovered The Red Hot Chili Peppers. Next to the Lads from Liverpool, they're now his favorite band (displacing the Rolling Stones). He also loves Queen. Naturally I approve of his taste in music.

*I gave him the three mini candy bars and a $5 bill in a small giftbox festooned with monkeys holding hearts. It's the kind of thing my mother would have done for him on Valentine's Day. They were extraordinarily close, and I was trying to fill the "grandma void." I think I done good, as he responded with the loveliest smile I saw all day.
Posted by The Gal Herself at 2/14/2015 09:09:00 PM 4 comments: 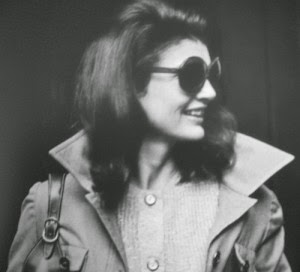 1) In this song, Jennifer sings, "I look good in love …" What about you? When you're happy, or sad, does it show? Or do you keep an even demeanor, no matter what? I wear my heart on my sleeve, and I hate it. That's part of why I so admire JBKO. No matter how public her life became, we never knew what was really going on behind the sunglasses. I envy that discipline and control.

2) This song played over the closing credits of a hit movie, Sex and the City. When you go to the movies, do you visit the concession stand for popcorn, or a soft drink, or candy? I either get a Coke (I love Coke) or Twizzlers.

3) Think of the last movie you watched at home. Was it a DVD, DVR, streamed or cable presentation? Before I began answering these questions, I watched From Here to Eternity on TCM. (It's 31 Days of Oscar on TCM! What a wallow for us classic movie fans!)

4) Jennifer Hudson got good grades in high school and went away to Langston University in Oklahoma. But she was homesick for her family in Chicago and came home after just one semester. Have you ever been homesick? I'm hopelessly sentimental. Whenever I leave a place -- whether it's home to go on vacation or my vacation destination to go home -- I get sad.

5) Jennifer received acclaim for her renditions of "The Star Spangled Banner" at the 2008 Democratic Convention and Super Bowl XLIII. Do you agree with critics who say that our National Anthem is hard to sing? Yes! You have to be Jennifer Hudson to sing it well. I wish we could replace it right now with "America, The Beautiful." It's a lovely song and the message re: our country is so positive.

6) Jennifer is a spokesperson for Weight Watchers and, with diet and exercise, went from a size 18 to a size 6. She says that while she's committed to healthy eating, she still enjoys ice cream occasionally. Do you prefer your ice cream in a cone or a cup? The last ice cream I had was neither. It was an ice cream sandwich.

7) Her fiance, Daniel Otunga, is a graduate of Harvard Law School. Harvard is the most famous of the eight "Ivy League" schools. Do you know the other seven? This is Big 10 Country, and I can't even name those. Sorry.

8) With a Grammy and an Oscar, Jennifer Hudson is one of the most successful American Idol contestants. Can you name another singer who appeared on AI? Kelly Clarkson

9) Last year, Jennifer nearly bought a brand-new Ferrari because it was so great looking. At the last moment she backed out of the deal because she doesn't drive enough to warrant such an expensive car. What's the last impulse purchase you either made, or resisted? I keep toying with losing the cords and getting WiFi. But I'd still need the modem anyway for the phone, and my Comcast bill is already insanely high. So I'll continue to live with the cords. I was comforted when I learned that 3% of Americans still use dial-up. That's literally millions of people who remain lower tech than me.