The wrapping is done 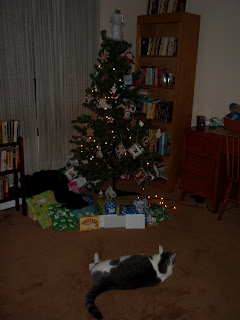 And my cat Joey approves!

It took me a little over two hours to wrap all these gifts. I did it in front of the tree while watching The Gathering, a great old Christmas movie. It was so much fun to imagine the faces tomorrow when the paper comes off.

I tossed in the long black scarf I got from my best friend because I wanted to remember it as Christmas 2011. You can't tell, but it's all ruffly. 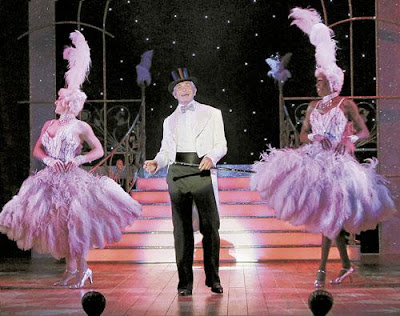 My friend John and I went to see La Cage aux Folles Wednesday night. It wasn't a great production -- the actor who played the bitchy maid/butler chewed the scenery so radically it threw the balance off -- but it was fun. Mostly because we got to see George Hamilton as Georges. 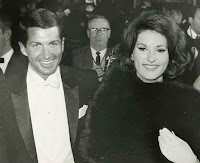 For my friend John and I grew up on him. He was on all the game shows and talk shows when we were kids. And I remember being a little girl, reading about his White House romance with Lynda Bird Johnson.

The only downside of the evening was John's health. He's still not well. I'm in shitty shape and, while a little winded when we got to our seats in the loge, I was fine. As were all the people around us. He was exhausted. On the way down, which you'd think would be so much easier, his foot bothered him again. It was sobering. He acknowledged the problem, saying, "This is something I need to mention to my doctor." Indeed! After all, George Hamilton is a good 15 years older than we are, and he was singing and dancing!
Posted by The Gal Herself at 12/23/2011 12:13:00 AM 1 comment: