They are breaking my heart!

The Cubs are not going to make the play offs. I know it. The Chicago sports press certainly knows it. The only ones who don't seem to know are the Cubs.

They gave their all again today. In the rain. Giving individually heroic performances -- Yu Darvish, I'm looking at you -- and even getting hurt in the process. Here's Kris Bryant being helped off the field after he slipped, trying to break up a double play on a slippery field. 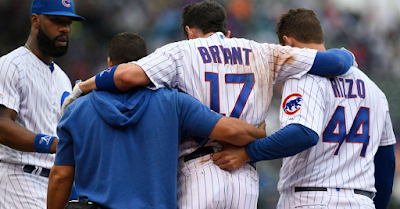 I just wanted to yell, "It's not worth it! Don't get hurt out there!" But that's not who they are. This team doesn't phone it in. Often they've been snake bit. Frequently they haven't been good enough. But they've never stopped trying.

I am sincerely touched by their guts and gallantry.

We live in a country where our President seems to be good with encouraging foreign countries to meddle in our election -- on his behalf, of course. We know he's good with mocking those with disabilities. I hope, when looking for role models, kids ignore the man their parents elected to the highest office in the land and instead look to The Friendly Confines of Wrigley Field. That's where they'll find fair play, commitment, teamwork and tons of heart.

I LOVE MY GUYS!


1. Last person you were in a car with? An Uber driver

2. Any plans for tomorrow? Go to work. It's going to be a slow day. I just need to put the finishing touches on a project that just won't end.

4. Is tomorrow going to be a good day? It should be fine.

5. Ever thrown up in public? Yes. After I had my wisdom teeth pulled. We found out too late that erythromycin makes me violently ill. I deposited the contents of my stomach in the bushes outside CVS where I was to pick up my anti-nausea medicine.

6. What’s on your mind RIGHT NOW? I want to go back to bed and close my eyes for just a few more minutes.

7. Who was the last person you talked to? Tony, the guy who does my hair.

8. What is the WORST subject they teach at school? Active shooter training. As a nation, we should be ashamed of ourselves. (And yet we aren't. Our national gun fetish is that powerful.)

9. Have you seen anyone lately that you don’t get along with? Not really

10. What is your favourite color top to wear? Cubbie blue. 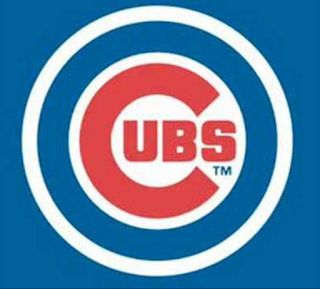 11. Have you ever been in a car accident? Just little scrapes. Nothing serious. I've been lucky.

12. What’s the closest thing to you that’s green? The leather cover on my paperback book.

13. Where would you like to be right now?  In bed with my eyes closed.

14. Is anything bugging you right now? Lots of little things. Nothing major.

15. Is life going right for you now? Better than some, I suppose.

16. Is there someone you care about more than yourself? No. And I find that when I get in that situation, bad things happen. To borrow from Whitney, learning to love yourself is the greatest love of all.

17. What made you laugh today? Nothing yet. It's still very early.

18. What was the last movie you watched? Caught the tail end of the Hepburn Little Women on TCM just now. (Poor Beth!)

19. What was the last conversation you had about? Money

21. Do you like your hair long or short? Short

22. Do you like the rain? I don't dislike it. I appreciate having all kinds of weather here in Chicagoland.