Because it's 4th of July, I'm thinking of a patriotic memory. When I was a little girl, we took the train from Chicago to Washington DC. (My mom was pregnant and in those days, pregnant women didn't fly.) We saw all the memorials and toured the Capital, but my memory of those are very vague. 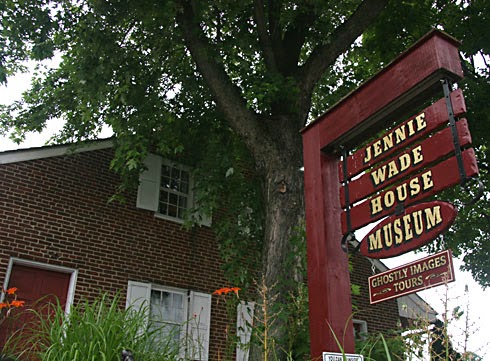 What I remember vividly was touring the Jennie Wade Home. Jennie was the only civilian killed during the Battle of Gettysburg. She was a young single woman, still living with her parents and engaged to a Union soldier. She was baking bread when a minie ball pierced the thick door. Her boyfriend died a few days later in another part of the war, never knowing that Jennie was already dead.

Touring the house, which is rumored to be haunted by Jennie, had a tremendous impact on a 7 year old Gal. Romance! Tragedy! Ghosts! A gift shop! It also taught me how I best learn history: make it personal. RFK's abandoned tortoise shell reading glasses, the too-short bed where Lincoln died, the ceramic donkeys Truman brought to his vacation home in Key West ... the things that touch my heart bring American history to life. And it started with Jennie.