Reflections on my Saturday

•  Bromelain is the enzyme in pineapple that causes diarrhea. I ate a ton of it Friday afternoon because it tasted sooooo good and because it's so full of vitamin C and fiber. I didn't know about Bromelain. I do now.

•  Got some serious streaks in my hair today. A good haircut with some highlights is a tonic for anything that may ail me.

•  Getting caught in the rain exhausts me. I don't know why. The storm cooled things off considerably and made the world more comfortable. Yet when I finally got home I slept away most of my Saturday night. I put on the Cub game -- it was on rain delay, of course -- dozed off and woke up hours later. Even after I finally awoke I was just lazy and rooted to the futon.

Saturday 9: I Got You, Babe


1) Popular music has produced almost countless groups, but not that many duos. Besides Sonny & Cher, can you name another? Hall and Oates. "She's Gone" has been running through my mind for a week now. That little earwig has really borne in!

2)  Hearing this recording from his clock radio is how Bill Murray woke up every morning in Groundhog Day. What woke you up this morning? My cat Rey decided at 4:30 that it was time to rise and shine. He can be a persistent little shit.

3) When she was growing up, Cher practiced her autograph for when she became a star. Is your signature legible? Or is it more of a scrawl? I have very nice handwriting. Which is worth very little in today's world.

4) In addition to show biz, Sonny & Cher had many careers: Sonny was a restauranteur and politician, Cher is an interior designer. Would you like to try your hand at any of those professions? Nope.

5) In 1965, when this song topped the charts, Sonny and Cher were as famous for their wardrobe as for their music. Sonny was fond of tall, heavy-heeled boots while Cher often paired granny dresses with bare feet. What's on your feet right now? I'm barefootin'.

6) By 1968, their career crashed. Cher's early attempts as a movie actress failed, their records stopped selling and the IRS came after them for back taxes. Have you ever been audited? Not an official audit, though twice I've received letters from the IRS explaining that they took a different view of my return than I did. That means twice they made me drink and cry and swear with worry. Fortunately both times my accountant cleared it up and I didn't have to pay any incremental tax.

7) In 1971 they were on top again with their TV show. But their marriage was coming apart. Sonny said, "For the last 5 years I worried about our career, not about us." Have you ever been guilty of putting career before relationship? No. I've been guilty of the opposite and shirking my professional duties because My Man needed me. Funny but in retrospect I do regret it. The men weren't worth it.

8) By 1972 they were living separate lives -- in the same house. For the sake of The Sonny and Cher Comedy Hour, they pretended to be happily married another year and a half. Tell us about a time when you pretended to be happy, but weren't. HA! Daily! I work in a clown car -- four of squeezed into an office space better suited to two. It's so exhausting to pretend, day in/day out, that I don't hate the proximity of my coworkers.


9) While their separation and divorce were bitter, they resumed their friendship when Cher showed up at the opening of his restaurant in 1976. Have you ever made the first move in repairing a relationship? Yes. I can be stubborn in relationships, to be sure, but if you're my friend I'm quick to forgive.
Posted by The Gal Herself at 8/23/2014 05:46:00 AM 10 comments:

I wanna hang with these guys 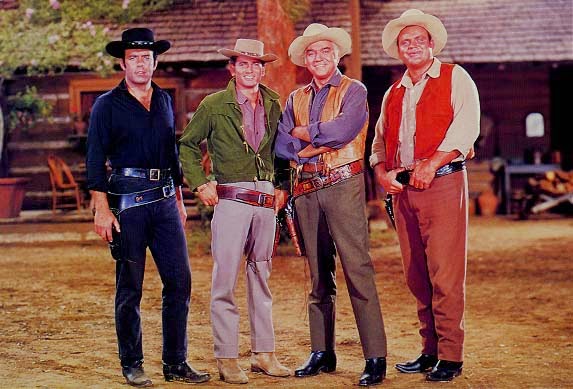 When I was housebound with a cold, I rediscovered Bonanza. My affection/appreciation grows with each episode I watch. Part of it is nostalgia -- when I was a kid, every adult in my life loved the show.* Part of it is quality -- it's well written. Part of it is novelty -- there aren't many westerns anymore.

Part of it is the Cartwright men. They were pretty neat. There's crazy successful patriarch Ben, who built the biggest ranch in Nevada, the Ponderosa. Fair and wise and sensitive. And wildly unlucky in love. His first wife died in childbirth. His second wife died in an Indian attack. His third wife was thrown from a horse. This accounts for two things: 1) since his three sons had different mothers, they can't be expected to look too much alike and 2) why no other woman ever got serious about this sterling man. On the one hand, he must have looked like a catch. On the other hand, I mean really! Marrying Ben Cartwright must be hazardous to your health.

Then there's Adam. Well read and almost always in black. He appreciated art, architecture, and messing with his kid brothers. I have a crush on Adam. Followed by Hoss, the gentle giant who is as strong as he is tender. And passionate Joe, who every now and again can be caught looking at the camera as if to say, "Can you believe how handsome I am?" And he has a point. My mother used to tell me that when I was a very little girl, maybe 4, I loved Little Joe and used to cry when he got punched or shot.

And the Ponderosa. It's a beautiful farmhouse. Living room, dining room and at least seven bedrooms. Of course there was no bathrooms in those days. But so many books! Adam and Ben loved their books and I love their built-in book cases.

Does your cable company carry the Me-Too channel? If so, you can watch Bonanza every day. You might want to give it a peek.