1. Are you loud, outgoing or shy? When I'm in public, I'm loud/outgoing. The thing of it is, I'd prefer to be locked in my own little room or with a close friend.


2. What’s coming up where you’ll see an old friend? Nothing planned with old friends over the next couple weeks. Maybe I should call John. Haven't seen him yet this year.


3. Are you easy to get along with? Not really. But I think I'm worth the work. I'm a good friend.

4. Have you ever given up on someone, but then gone back to them? Yes. But I usually find I should have trusted my initial instinct.

5. Who was the last person that you had a deep conversation with? My nephew, yesterday. He's a sensitive, thoughtful kid.

6. Are you okay with being in a big crowd? Sure.
7. Do you believe in luck and/or miracles? Intellectually, no. Emotionally, yes.

8. What good thing happened during the summer? (It’s good to think about summer when you are freezing your butt off in January.) Perhaps you've heard that THE CHICAGO CUBS WON THE WORLD SERIES. It was glorious! BTW, 5 million people attended the rally and parade. (The population of Chicago is 2.7 million.) This Cub team meant to much to so many. 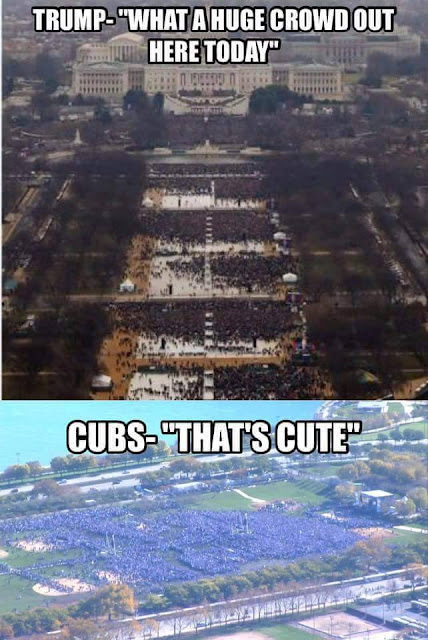 9. Do you think there is life on other planets? Intellectually, yes. Emotionally, no. But I don't think about it much.

10. Who was your first crush on? My mother reported that at about the :43 second mark, this little Gal said, "He's so pretty it hurts to look." 52 years later, I still love Sir Paul.

11. What are your bad habits? I'm a lazy slob.
12. What’s your favorite part of your daily routine? Feeding my cats. They're so cute.

13. Other than your significant other, who are you most comfortable with? Probably the aforementioned John. We each accept one another as we are.
14. Has an ex ever told you that they regret breaking up? Yes. I didn't believe him. I think he regretted being engaged to my successor.
15. Why should your celebrity crush drop everything to be with you? Because I've been steadfast for 52 years.
16. What would be the hardest to give up and why? Books. TV. Music. TV. You can find music and conversations about books on TV.
17. Do you believe in second chances? For myself, yes!
18. What would like to do next in your life? I'd like to feel serene.

19. What’s the meanest thing that anyone has ever said to you? Oh, God. Let's not dwell on that.