"The day it started moving"

On July 6, 1957, John Lennon met Paul McCartney for the first time. And the world is better for it. Here's the plaque that hangs at St. Peter's Church in Woolton, a suburb of Liverpool. John's band was playing at a church dance, and a mutual friend introduced him to the 15-year-old McCartney kid. As John recalled, "That was the day, the day I met Paul, that it started moving." 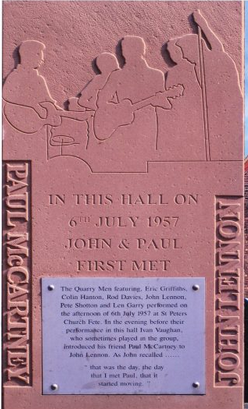 I'm happy to report that St. Peter's still stands and has a thriving congregation. It's closed now, of course, because of the global pandemic. But they're preparing to reopen soon for weddings, funerals and baptisms.

Sure, we're in the midst of a pandemic and have lost more than 130,000 of our fellow citizens. But this, ladies and gentlemen, is what our President chose to share with us today ... 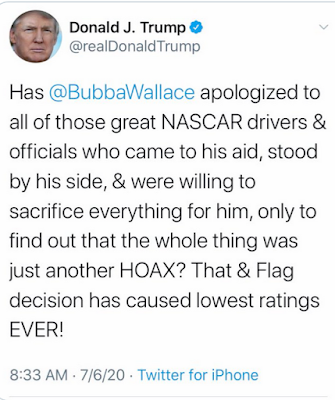 3) The FBI (you know, part of Trump's government) referred to it as "a rope fashioned as a noose" in their official report.

So why, Mr. President, should Bubba Wallace apologize? And to whom?

If anything, President Trump should apologize for this tweet. Of course, he should also apologize to Barack Obama for birtherism (hoax, anyone?). But then again, why should he? Blaming blameless black men is good for his brand.

People maintain that our country is more divided than ever before. I'm old enough to remember 1968, so I dispute that. But let's go with that premise.  How do misinformed tweets like Donald Trump's do anything to bring us together?

Just another reason to vote this November! Do whatever you can to help elect Joe Biden. Don't let anything deter you from sending this man home to Mar-a-Lago for good. Then, in January, we can begin to heal.