WHAT A CHARACTER! Blogathon 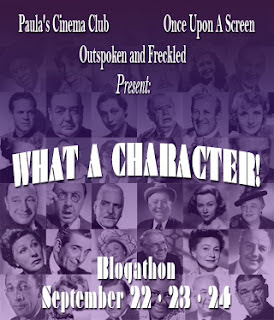 A TRIBUTE TO GAIL PATRICK 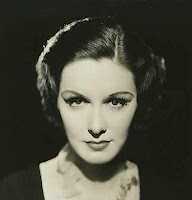 You know her: The dark-haired beauty who bedevils the fair-haired heroine. Stylish and smart, she was always a formidable foe, but -- movies being what they are -- she never wins. In short, spicy Gail Patrick helped make such leading ladies as Carole Lombard, Ginger Rogers and Irene Dunne seem twice as sweet. Her screen persona is clearly illustrated in three of her most famous films: My Man Godfrey, Stage Door, and My Favorite Wife.

My Man Godfrey (1936). At the center of this sublime screwball comedy are the Bullocks, a Park Avenue family has more eccentricities than sense. Gail Patrick is sophisticated Cornelia, the sister who has to win at all costs. The inimitable Carole Lombard is adorable Irene, who has so much heart and humor that they crowd out common sense or killer instinct, making it easy for Cornelia to best her at every opportunity … until a new butler, Godfrey (William Powell). enters their lives and puts his thumb on the scales, tipping them in Irene's favor. 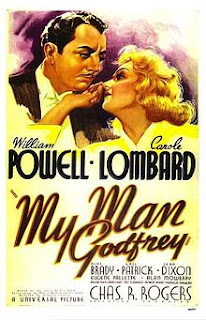 Unlike the guileless Irene, Cornelia is smart and scheming and makes no attempt to hide it. At one point she requests a favor of her current beau, he automatically asks, "Who do you want killed?" She dismisses this comment as silly, not because she's not that kind of girl but because, "I do my own killing."

Cornelia is a beautiful woman, so it's not impossible to imagine men preferring her to the luminous Lombard. In Gail Patrick's best scene, Cornelia makes a serious play for Godfrey. He responds by telling her how he feels about her, calling her a spoiled "Park Avenue brat" who wastes her energies on childish pursuits that are beneath contempt -- even the contempt of a butler. Because Cornelia admires Godfrey, his words hit her like a whip. She visibly winces but then replies haughtily, "Thank you for a lovely portrait." Naturally, we're glad our hero Godfrey sees Cornelia for the selfish scorpion she is and prefers Irene. But the way Patrick plays it, we're touched by her sad attempt to retain her dignity and we find ourselves pulling for her despite ourselves, hoping that she will see the light and turn her life around. 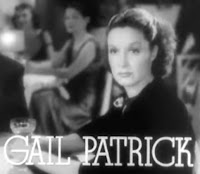 Stage Door (1937).  Instead of an heiress, she's a working girl, just another aspiring Broadway starlet in a very full rooming house, waiting for her big break. While the movie stars the indomitable Katharine Hepburn, Gail Patrick's Linda finds herself tangling not with Kate but with Ginger Rogers' Jean.

Linda and Jean are dancers who compete not only for musical-comedy parts, but for the attention of the much older and very influential producer, Anthony Powell (suave and slimy Adolphe Menjou). As the movie begins, Linda is Powell's current "flavor of the month." Linda relishes this not only because it can advance her career, but because Powell is showing her a life she could never afford on her own. It also gives her prestige in the boarding house. And remember, Linda is sharing space with some very formidable roommates -- in addition to Hepburn and Rogers, the stellar cast includes Lucille Ball and Eve Arden. 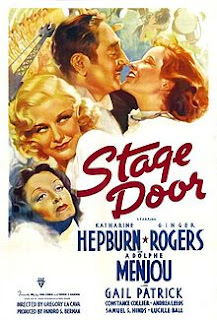 It would be easy for Patrick to get lost amid all these  smart-talking dames, but she doesn't. She rises above, working so hard to command respect that she never sinks into villainy. Yes, she's sleeping with the producer to further her career. The movie is rather frank about that. But she's also sympathetic because Linda clearly realizes how tenuous her position is. She attempts to hide her desperation by appearing tough and confident, even when confronted by a pretty blonde replacement (Rogers' Jean).

The scenes between Linda and Jean crackle with tension, because (1) each recognizes how worthy her adversary is, and (2) the prizes at stake -- a modicum of financial stability and even better, a part! -- are so rare and dear in their world.

Linda: If you were a little more considerate, maybe Mr. Powell would send his car for you someday. Of course, he would probably take one look at you and send it back … You know, I think I could fix you up with Mr. Powell's chauffeur. The chauffeur has a very nice car, too.

Jean: Yes, but I understand that Mr. Powell's chauffeur doesn't go as far in his car as Mr. Powell does.

Linda: Well, even a chauffeur has to have an incentive.

My Favorite Wife (1940). At last it looks like Gail Patrick gets the man. And, oh, what a man! At the beginning of the movie, her Bianca Bates marries Nick Arden, played by none other than Cary Grant. But romance never runs smoothly for typical Gail Patrick girls, and Bianca is no different. 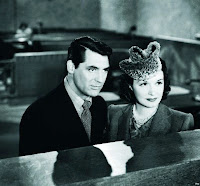 The film opens with Bianca and Nick trading I Do's before a judge. Nick has just had his beloved wife Ellen declared dead, a full seven years after she went missing at sea. While Nick and Ellen were once happy together and had two lovely children, he believes it's time to move on.

Unbeknownst to Nick and Bianca, Ellen Arden (Irene Dunne) has just been rescued from the Indonesian island where she's been shipwrecked all this time and she's on her way to back to a joyous reunion with her husband and children.  Uh-oh!

After she receives a tip from Nick's sympathetic mother, Ellen takes off for Yosemite, hoping to interrupt Nick and Bianca's honeymoon and reclaim her man. Just as the elevators close, taking him and his new bride to their hotel room, Nick catches sight of Ellen. But it can't be! He just had her declared dead! Naturally, he's shaken. 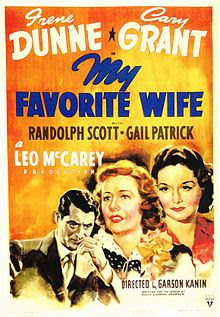 After quite a bit of charming slapstick, Nick realizes that Ellen is indeed back, healthy and whole, and he's thrilled to have her. But now he has two wives. What to do?

The contrast between heroine and interloper is so clearly drawn, it's as though director Garson Kanin and screenwriter/producer Leo McCarey used a thick, black magic marker. Irene Dunne is fair-haired, Gail Patrick is dark. Dunne's character is the homespun Ellen, and Patrick is the more exotic Bianca. Ellen is a loving mother, Bianca is childless and, at best, a dubious stepmother. Ellen was able to thrive on a deserted island, whereas Bianca couldn't survive without room service. The sophisticated Bianca calls on a foreign-born psychiatrist to help her understand Nick's sudden coolness and erratic behavior. Ellen is a well-adjusted, neuroses-free All American Girl.

So while the movie itself is funny and endearing, in My Favorite Wife, Gail Patrick found her quintessential, and most thankless, role. With Bianca she's not so much a character as a clever plot device. Yet she acquits herself admirably. Nick makes it clear that Bianca was good to/for him after he "lost" his wife and, if he's not exactly in love with her, he appreciates her and doesn't want to hurt her. So it's Cary Grant's humanity and charm in the role of Nicky that engenders sympathy for Bianca, not the script.

A full career after movies. In 1947, at the age of 36, Gail Patrick married literary agent Cornwell Jackson and walked away from acting. A lifelong diabetic who found childbearing difficult (she gave birth to premature twins who lived only a short time), it's sweet and touching that upon her retirement she opened a playground in her home, an informal daycare for the children of working actors and actresses. She also took her lifelong love of fashion and turned that toward kids, designed a line of children's wear. Happily, she and Jackson eventually adopted two children to complete their family. 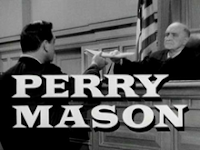 Then, in 1957, she returned to show biz, behind the camera. Her husband was Erle Stanley Gardner's agent, and that gave her a huge advantage when she wanted to bring Gardner's Perry Mason character to television. She executive produced 271 episodes of the extraordinarily successful show for CBS and Gardner's Paisano Productions.

She in died 1980 at age 69, but she lives on through the Gail Patrick Charitable Trust Scholarship. In her will, she left $1 million to the help "young women of distinction" continue their education, regardless of their finances. She is also remembered for lending her time and talents to the American Lung Association's Christmas Seals Campaign. "My Man Godfrey" would have been very proud of how beautifully "Miss Cornelia" turned out!

Three great bloggers/Twitter pals, Kellee (@IrishJayhawk66), Aurora (@CitizenScreen), and Paula (@Paula_Guthat), are co-hosting a celebration of character actors–those indelible supporting players who populate some of our favorite films. As they explain:


“[We] are dedicating an event to the great character actors that so enhanced our classic movies. To the faces, the laughs, the drama presented by these wonderful actors whose names all too often go unrecognized we dedicate WHAT A CHARACTER!
We think these and so many others deserve their due.
So, here we are with a blogathon in their honor.”