Let's see now ... I have a pedicure scheduled for Friday, a massage booked for the 30th, even a vet appointment for Charlotte the first week in August. The one call I dread making is to the hospital to schedule my mammogram.

Last year it was an ordeal. It took weeks of worry to find out that my "suspicious" films were really "benign," with "no follow up required." I expect that, once again, my initial films will be "suspicious" and I'm really not up for replay of all 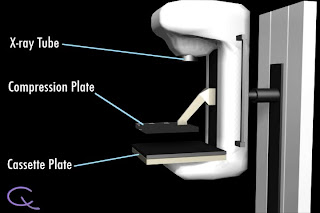 Especially not with the news I received about Kathleen last week.

But I'm a grown up. I can't rely on anyone but myself, after all, and so I have taken a big sheet of paper and written the phone number of the hospital's Comprehensive Breast Center on it. I will call tomorrow and make the heinous appointment. It's the only smart and responsible thing to do.
Posted by The Gal Herself at 7/14/2010 05:38:00 PM 2 comments:

One coworker has decided not to return from maternity leave. Another is following her husband's career trajectory to Nebraska. While I am happy for the personal fulfillment their decisions promise these women, I am melancholy for myself.

And I'm especially haunted the prospect of the BIG ones -- my mother and my uncle. My mother's deterioration has escalated since her first bout with pneumonia in 2009, and it's scaring me. She's forgetful and her perception is way off somehow. Last Sunday she told my nephew that the world we live in today -- two wars and a Recession -- is every bit as bad as it was when she was a little girl. Now, really! Where's our Hitler? Where are the homeless people knocking on the door, asking for food in exchange for work? I asked her if she was serious and she said, "yes." All I can do is shake my head.

Likewise my uncle is fading and fading and fading. The State of Illinois now commandeers his mail and pays his bills for him, and has decided that he needs neither cable nor a cell phone. His response is to be petulant. Just 15 years older than I am, and deemed not able to handle his own affairs. It's rattling.

These two goodbyes -- the inevitable ones, the ones that are moving inexorably closer, are the ones I fear most.
What about you? What do you want this Wednesday?
Posted by The Gal Herself at 7/14/2010 05:03:00 PM 1 comment: