Unfamiliar with this week's tune? Hear it here.  From our archives.

1) Black is this week's signature color because Friday was "Black Friday," the day when retailers cut their prices and consumers flock to the stores. Did you score any "Black Friday" bargains? Yes. I hadn't expected to go shopping on Friday because I'm just so over the crowds. But a local grocery store has a tree with paper ornaments made by kids from lower income households. On the back of each ornament, the child shares what they'd like from Santa. I drew Emily, a 4-year-old who wears a size 6 and wants "Anna and Elsa."


Old Navy was busy but not crazy, so I slipped in and got her a fuzzy green sweater (50% off!) and some slipper socks (on sale for $1!). Then I stopped by the local independent bookseller. Instead of cutting prices, they're donating 10% of sales to a homeless shelter. There I found a Big Golden Book based on Frozen 2. So Emily is set!

2) Feasting and football are also popular Thanksgiving weekend pastimes. Do your Thursday-Sunday plans include pigging out or watching a game? While I tend to pig out on weekends anyway, I have no specific dining plans, and I seldom watch football.

3) At Thanksgiving dinners, Crazy Sam's homemade gravy is always a hit. (Probably because she's so generous with the cognac, which gives the gravy a nutty taste.) What was particularly delicious at your Thanksgiving table? I had "The Works," with pumpkin pie for dessert. It was all excellent, but I was especially happy with the turkey and gravy.

4) Among the biggest the Black Friday advertisers are Target, Kohl's, Macy's and Best Buy. If you could have a $100 gift card to any one of those stores, which would you choose? Target, because I can pick up groceries. This whole needing to eat thing is such a drain on my budget!

5) This week's song, "Baby's in Black," is about a girl who wears black because she's in mourning. Do you find that the color you're wearing reflects your mood? Yes. It makes me happy to wear Cub-related gear. (Right now, I'm wearing a XXL Anthony Rizzo 44 t-shirt as pajamas.)

6) The woman who inspired this song, Astrid Kirchherr, has been friends with Paul McCartney since he and his bandmates (John Lennon, George Harrison, Stu Sutcliffe and Pete Best) met her in Hamburg back in 1960. Tell us what you believe are the components of a strong, lasting friendship. Availability. I work at this. I want my friends to know that I'm free to talk, email or get together when they need me. Or just want me. These days, our lives are so busy, and time is at a premium. Friends are worth the time.

7) In the early days of the Beatles, Paul McCartney and John Lennon began writing a play but abandoned it. Do you have a novel, painting, play, song or poem that you're going to finish "someday?" Every year I do Nanowrimo. It's my opportunity to write fiction for myself, not for publication. As a copywriter, I'm used to being given a topic and a deadline. Compliance departments make sure every word I write is within guidelines. Nanowrimo is a good exercise, and fun for me.

8) When he was 16, George Harrison dreamed of moving to Canada, Australia or Malta. In just a few years, he would visit all those places with Beatles and eventually decided there was no place like home and stayed in England (though he did also maintain a home in Hawaii). Have you ever thought about moving to another country? If so, where? No.

That's how Thanksgiving felt. John, Gregory and I met at Millennium Grill at 6:00. We did the prix fixe menu, which gave us all the basics -- green beans, sweet potatoes, mashed potatoes, dressing, gravy, cranberries and, of course, turkey -- all on one plate. Dessert was extra, but mandatory for me, so I had a slice of pumpkin pie. 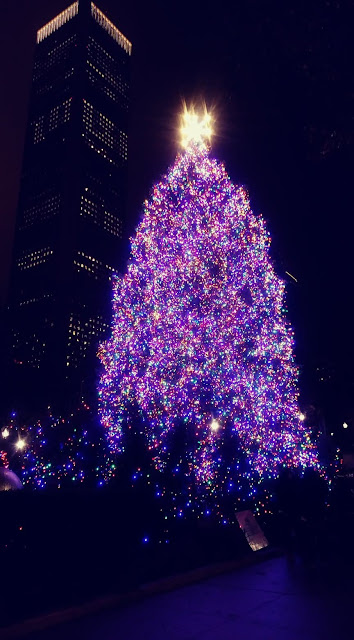 The best thing about this restaurant is that it's in Millennium Park, home to Chicago's official Christmas tree.  And what a tree! A 55-ft. tall blue spruce covered in nearly 55,000 lights!

As we ate, John and Gregory were able to watch the skaters twirling around. (I sat in the other side of the booth, but that's OK. I got there early and took pictures.) 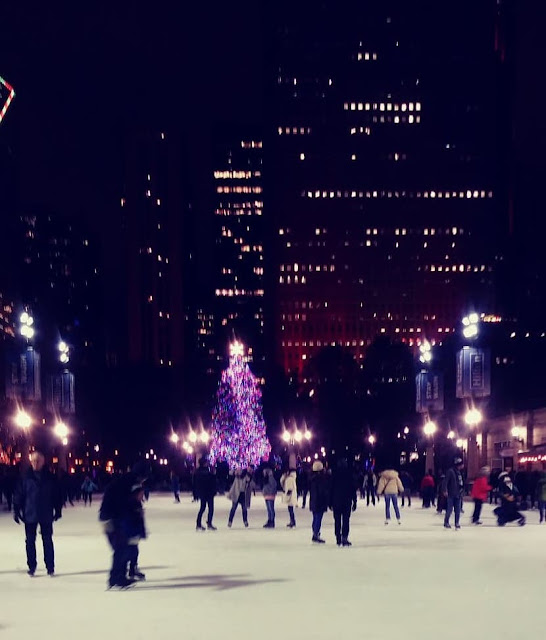 We had a nice time together, agreeing that this was a much easier-going holiday than we'd ever had with our families. Two memorable moments:

•  The manila envelope. Inside was a yellowing press page of the Chicago Sun Times,  dated February 9, 1964. It was a story titled, "Bug Bites Beatle," about how George was battling the flu in the run up to the Ed Sullivan Show that night. It was thoughtful and very cool.