Let's get our facts straight

I'm not a Southerner. I've vacationed in the South -- Atlanta and Little Rock/Hot Springs, specifically -- and enjoyed it. I feel far more comfortable there than I ever have in Los Angeles. But I am not a Southerner. I grew up in the Land of Lincoln, and am proud to hale from the state that gave us the man who saved the Union.

That's why I don't get the affection anyone feels for the Confederate flag. At best it stands for secession. At best, flying that flag flies in the face of "one nation, under God." So I don't understand why it's flown on any day, anywhere, after 1865. 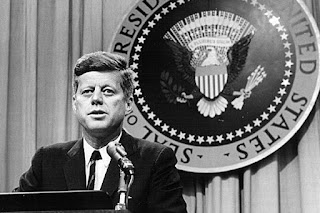 But if you want to know why it flies over South Carolina today, it's more about this man than it is about Robert E. Lee.

In January 1961, a Federal court upheld the right of black students to attend the University of Georgia. That didn't play well in the South. "Two four six eight, we don't want to integrate!" Then, in March, 1961, President Kennedy signed an executive order prohibiting segregation in the federal workplace.

The Confederate flag went up over the South Carolina statehouse just weeks later. In April 1961. Ninety six years after the end of the Civil War.

If the GOP wants to truly own the mantle, "The Party of Lincoln," it's time for them to join statesmen like Sen. Lindsay Graham, and Jeb Bush and Mitt Romney and call for the removal of the Confederate flag.