A young mother named Margot was walking in the woods near her home in Chappaqua and guess who she encountered. The Clintons, walking their dogs together in the woods. Margot was so excited to see Hillary, to be able to introduce her baby girl to Hillary, that she handed the phone to Hillary's husband and asked him to take a photo. It wasn't until later that she'd wished she'd asked a Secret Service agent to snap it so she could get a picture with the former President as well as the Democratic nominee. 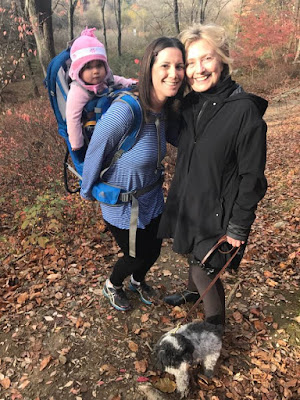 This makes me happy for so many reasons. First of all, look at her. No makeup, hair mussed, and smiling. Say what you will about HRC, she knows how to take a punch and keep on going.

So I'm going to take comfort in this and try to keep positive about the curious turn the world has taken.