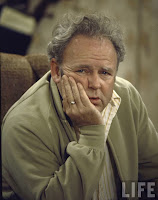 My dad was like Archie Bunker. He used to say grumpy shit that didn't make sense, that he didn't even mean, just to hear himself being grumpy.

"I'm never buying anything from Japan again." (Even though the TV he had just bought me for my room was by Sanyo.)

"I'm never going to another baseball game again." After the first baseball players' strike in 1981. OK, that was true. But because no one ever invited him to another game, not because of his heroic anti-labor stance. Anyway, you get the idea.

I HATE IT WHEN ANYONE PRESSES MY "DAD" BUTTON!

Unfortunately, my oldest friend is flirting with a man who is leaning heavily on my dad button. They met through some SoCal dating service and have traded emails and spoken on the phone. Because I am very protective of her -- and because she doesn't need anymore shit or heartache -- I have been cyber stalking this guy. Between Twitter, Facebook and his blog, he gives me a lot of material.

At first he gave me pause because he wrote that he was so sorry that Joe Paterno is a victim of this Penn State mess. What the fu ... Oh, well, the guy used to be a sportscaster. Maybe he can't stop looking at the world through that prism. A little baffling for a father and a grandfather regarding the subject of child abuse, but I'm a barren spinster, what do I know?

He's done with Bette Midler because of something she tweeted. He guesses she doesn't want conservative fans like him.  HONK! Dad button again.


Today he's mad at OWS because they have taken over parks paid for with tax dollars and he wonders what's next. Are they going to camp out all night in affluent neighborhoods to protest people who work for a living and earned what they have?  HONK! HONK! Yes, Dad, that's exactly what's next. They're pitching their tents on Kirk Kerkorian's lawn right now.


Like my oldest friend, he has had a lot of health problems lately. Perhaps they are weighing heavily on him, and that explains the dearth of joy in any of his posts.


But still, he sounds like an angry man and I'm getting a very toxic vibe from him. With everything my friend has been dealing with, I don't know that Archie Bunker is really who she needs right now.

Therefore, as mean as this sounds, I hope he cancels on her. I really do. I know how sad and lonely she is, but she's already looking at this man as her "soul mate" and talking about which cologne she's going to wear for their first meeting. I'm scared for her with this guy. Not physically, but emotionally.

I hope I'm wrong. I'd love to be wrong. Please let me be wrong and please let her have her happy ending.