1) The Love Boat ran from 1977 to 1987. It was in the Top 10 for seven of those 10 seasons. Are you familiar with the show? Were you a fan? No. The only time I ever remember watching it was whenever I stayed with my Cousin Rose for a weekend in Michigan. We'd drive to her parent's home for dinner on Saturday night. They were my great aunt/uncle, very set in their ways, and it felt more like a formal audience than a visit. After dessert, we would dependably move to the living room, where they had their after-dinner coffee and we all watched The Love Boat. They were so happy when they saw the week's stars. "Oh! Charo! She's so cute!" After The Love Boat, Rosie and I would go back to her house and resume our visit.

2) Every week, viewers followed The Pacific Princess as she set sail to a glamorous destination. Have you ever taken a cruise? If so, where did you go?  I've never been on a cruise. I used to consider the TCM Classic Cruise because classic film fans tell me that -- while upfront it's a lot of money -- it ends up being a little cheaper than the TCM Film Festival because of all that's included (especially meals). Maybe next year.


3) Gavin MacLeod played Captain Steubing. Born Allan See, he came up with the stage name by combining the first name of a fictional character he admired, and the last name of a teacher who influenced him. Using his formula, give yourself a stage name. For example, Sam would be Hermione Hart (Hermione from Harry Potter; Hart for her Kindergarten teacher). Call me Mary Dombrowski: Mary for Mary Poppins and Dombrowski for my high school American history teacher.


4) After the series ended, Fred Grandy (aka "Gopher") went on to become a Congressman from Iowa and then CEO of Goodwill Industries. If you had a bag of gently-used items to donate, where would you take them? Goodwill.

5) Ted Lange is best known for his role as the ship's bartender, Isaac. But he began his career performing the classics, and appeared at Colorado Shakespearean Festival and London's Royal Academy of Dramatic Art. Let's class up this joint. Give us a little Shakespeare.  "Leave her to heaven and to those thorns in her bosom that lodge to prick and sting her." Hamlet.


6) Bernie Kopell played the ship's doctor, Adam Bricker. Kopell first appeared on TV in 1961 and was a regular on Get Smart and That Girl, and he's still acting today. But Love Boat was, by far, his favorite role. Working on the show was "absolute heaven" because he was paid to travel the world and meet his acting idols, like Oscar winners Greer Garson, Joan Fontaine and Eva Marie Saint, who appeared on the show. When you think of the best job you have ever had, what made it so good: the pay, the location, the people you met, or the work itself? In the late 1990s, I had almost all of it: Good pay, nice office, and a spectacular boss. He was honest and I was proud to work for him. He founded a powerful advertising agency and last year he died a wealthy man, but all that success came to him because he lived the Golden Rule.

7) Lauren Tewes played Cruise Director Julie McCoy. Today she lives in Seattle, appearing in local theater and -- between acting assignments -- working as a chef for a catering service. Have you hosted dinner for more than 8 people? If yes, do you remember what you served? Pizza and salad, delivered from around the corner.

8) For the first nine seasons, the theme was sung by Jack Jones. The Grammy-winning

singer says one of his career highlights playing Sky Masterson onstage in Guys and Dolls. In his late 50s at the time, had had to go outside his comfort zone, dancing and acting as well as singing before a live audience. Tell us about something new you tried recently. Well, it didn't take me out of my comfort zone, exactly, but since the pandemic I've discovered borrowing electronic media from the public library. Libby and me, we're pals now.

9) Random question  -- Which would you rather receive as a gift: one $500 wristwatch, or five $100 wristwatches? My preference would be ten $50 watches. Before the pandemic, I enjoyed choosing which watch I'd wear each morning, so I preferred quantity over quality. Of course, these days I work from home and don't really go anywhere, and don't want to ick up my watches with all the soap and water or hand sanitizer, so they're all safely in my drawer ... waiting for a vaccine so we can all go back to normal.

It's here! My guys are back within The Friendly Confines!

It was a uniquely 2020 Opening day. They began the game wearing face masks and honoring both the National Anthem and Black Lives Matter. (Because we can and should do both.) 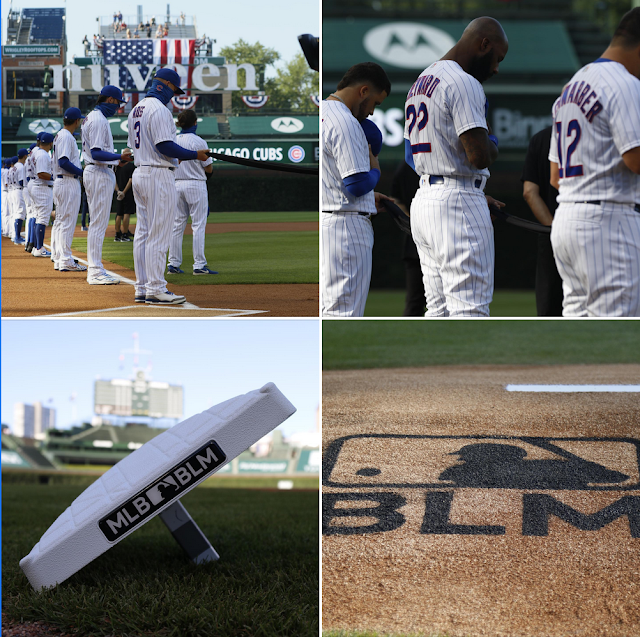 My darling Rizz shares his hand sanitizer. (He also got a homerun!)

Bill Murray sang the stretch from the safety of his home, and with the companionship of his own personal Cubby. 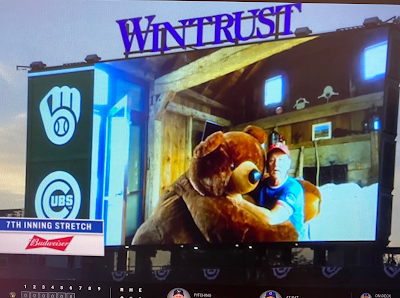 They won. Of course. But you know, I would have been happy even if they hadn't. I am watching my guys be great role models as they play America's Game when America needs it most.

It's Opening Day, and I can watch it! Overnight, the Cubs and Comcast came to a (literally) last minute agreement and I can see Kyle Hendricks toss out the first pitch of this abbreviated Cubs season.

Last year, the Cubs and their long, LONG time network, WGN, amicably parted company. It made sense for WGN because they want to be viewed as a national channel and carrying the Cubs and the Blackhawks is just a bit too local. Also, with 160 games in the (regular) regular MLB season and 80+ (under normal circumstances) for the NHL, that's a lot of broadcast time to dedicate. So while I didn't like it, I got it.

What I didn't understand was the Cubs next move. Instead of signing a deal with the local ABC affiliate or the NBC Sports channel, who both appeared very willing, they started their own cable channel: The Marquee Sports Network. Maybe that was a good idea. In this cut-the-cord environment, I'm not so sure, but there are people more learned than I advising them.

But they got super greedy. They immediately cut a deal with AT&T and went on to (pardon the pun) play hardball with Comcast/Xfinity, and the vast majority of fans in Chicago have Comcast. They were asking what Comcast considered an unreasonable amount, and Comcast kept saying "no."

The Ricketts family, who owns the Cubs, was betting that we would follow our team anywhere. And we are fabulously loyal. But we can also read.

Marquee Network is part of the Sinclair Broadcast Group. Aka "Trump TV." This isn't surprising, since the Ricketts family is all-in with our President. That's their right. I don't approve of toxic FOX/Sinclair News, but then my recourse is to simply get my news elsewhere.

But I'm not switching from Comcast to support that swill. Comcast has given me good service in every sense of the word -- including MSNBC, which is the antithesis of FOX/Sinclair -- and I'm not leaving, even for my Cubs. I was prepared to just watch games on my computer or listen on the radio. (See post below.)

Apparently I'm not the only Cubs fan of conscience, because the mass exodus from Comcast to AT&T just didn't happen. And things just started getting harder and harder for Cubs management.

•  The pandemic, part 1. With the ballpark closed to the public, they're not getting revenue from ticket sales, hotdogs and parking. They need whatever Comcast is willing to pay.

•  Trump. He's sending Federal troops to Chicago to ... well, that's not clear. He keeps talking about lawless gangs of immigrants and everyone here knows that is not the root of the gun violence plaguing our city. It's illegal guns flooding in from neighboring states with lax gun laws and it's young men dealing drugs because they can't find work. If Trump wants to send ATF to get the guns off the streets, that would be helpful. If he wants to do something about infrastructure and add shovel-ready jobs to the economy, that would be even better! But instead his reckless talk is dissing and endangering our citizens for cheap political points. Trump's timing regarding Chicago could not be worse for the Cubs management, especially poor Todd Ricketts, the RNC fundraising chairman. (I can just imagine his siblings boxing Todd's ears and yelling, "You're supposed to stop Trump from doing stupid shit like this!")

So last night, the Ricketts family blinked. And this morning, just 12 hours away from the first pitch, Marquee was on Channel 202!