Ha! I believe I have thwarted him. 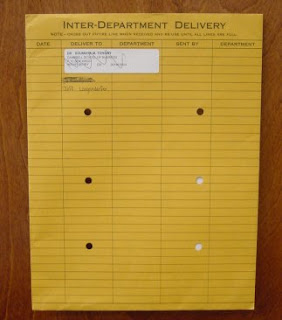 Regular readers are familiar with my ongoing battle with my cat, Reynaldo. For the last four years, he and I have been engaged in a battle of nerves. No, wait, that's not right. Rey has no nerves. Make that a battle of wills. For you see, like Stitch in Lilo and Stitch, Rey is programmed to destroy. Sometimes he gets so wild, so pumped on adrenaline, that he can't seem to stop his little furry self from knocking over all my manila folders, letting the contents spill onto the floor, and then digging around in them so there is no semblance of order anymore -- none whatsoever. Last time he did this, I was so overwhelmed by the mess he made that I nearly cried.

After giving it some thought -- and reminding myself that as a human, I am gifted with both superior intellect and opposing thumbs, so I should be able to win this battle of wills -- I have stumbled upon the solution. I replaced the manila folders with interoffice envelopes that have velcro on the flap! These well-worn envelopes were en route to being recycled anyway, so I have given them a new lease on life. And, should Rey knock them over, the contents can't come out and he can't dig around in the paper like a picnicer digging for clams at the seaside.

He watched me move the files last night. Very attentive. All purry and affectionate. Poor little guy. I bet he didn't realize he was watching me stage his Waterloo.
Posted by The Gal Herself at 2/13/2009 04:08:00 PM 4 comments: Links to this post

In praise of Border's

I live in the navy blue village of a deep blue state, and we tend to examine and protest everything. Especially big chain stores, which are perceived as the death knell for the small, independently-owned shops that add to our town's character. That's why I signed petition after petition to stop Border's from opening on the main drag in my town.

I was wrong. I am so glad Border's is there. It's my first choice when I'm buying books, DVDs or music. Why?

1) They have an enormous selection. Smaller bookstores just can't carry all the titles.

2) They're one-stop. I can buy gifts and cards in one place. Also, when I don't know what to buy someone, I buy them a Border's giftcard. Who doesn't like books, music, DVDs or magazines?

3) The help is always helpful. We have two independent booksellers on the same street as Border's. I admit that if I'm not in a hurry, I like to browse in one of them. It looks and smells like a nice wooden loft. Customers in there take their books seriously and so there's always a good conversation going on. They also have way-cool wooden postcards! Alas, they aren't open as early, nor as late, as Border's. But the other one (Barbara's Bookstore) is icky and I will never go in there again. The staff is too cool for school. They actually scoffed at a friend of mine who asked if In Cold Blood was in stock -- apparently they didn't feel it was worth carrying, ordering or even reading. (And here I thought it was a classic. Silly me!) At least he got someone to wait on him -- they're usually too busy chatting with one another to be bothered. Worst of all, they recently had Sam Giancana's daughter signing books on 11/22 -- the anniversary of the Kennedy assassination, which she claims her father was involved in. That was tasteless. At Border's, the staff is always accessible and helpful, and I've never seen them mock a national tragedy.

4) Border's Rewards. I admit it: I'm a loyalty-points whore.

5) They give local charities a chance. For example, over the holidays, I was able to have my gifts wrapped right there in Border's by developmentally-challenged adults from Lamb's Farm. It was lovely to interact and support people I wouldn't see otherwise.

Rumor has it that Border's is suffering in this economy, so SUPPORT YOUR LOCAL BORDER'S. This weekend I may just hit Border's again. I suggest you all do the same. I bet they're an asset to your community, and if they disappeared, you'd miss them.

Book Mama, this one was for you.

It won't be long now! 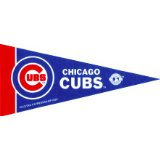 Alas, this is the first spring in decades that I'm not checking on my beloved future Hall of Famer, Greg Maddux.

One President Honors Another

Barack Obama came home yesterday. Two years ago, he announced his candidacy in Springfield. Today, he returned to honor the only other President to serve in the Illinois Assembly -- Abraham Lincoln. It was very exciting for me as an American, as an Abe-o-phile, as an Obamaniac ... and as an Illinois citizen who hungers for something to wash away that bad Blago taste.

The President was clearly in a relaxed, happy mood: "The former state senator said the roomful of supporters reminded him of what Lincoln once said to a favor-seeker who claimed he helped the president get elected. 'Well,' said Lincoln, 'it's a pretty mess you've got me into. But I forgive you.' So whoever of you think you were responsible for this, we're taking names," Obama said."

The 44th President spent all day Thursday remembering the 16th. While Lincoln certainly earned all the honors, it occurs to me that invoking Abe could be dangerous for Obama. For it invites comparison -- and was anyone ever braver, kinder or more wise than Abraham Lincoln?
Posted by The Gal Herself at 2/13/2009 12:44:00 AM No comments: Links to this post