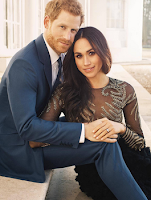 Naturally, I've been devouring news about Prince Harry and Meghan Markle. I have watched Diana's Boys grow up, and think Princes William and Harry have matured into outstanding young men. I am sure that their mother is looking down, very proud.

But there's drama involved in the run up to The Big Event. Courtesy of Meghan's dad and stepsiblings. The bride had planned on walking down the aisle on the arm of her father, but it's not going to happen. He's not coming. He's had heart problems, paparazzi problems, kid problems. It's easy to imagine how disappointing it is for Meghan, and how difficult to deal with it in the public spotlight.

She reminds me of another bride, and a wedding that took place before I was born. In September, 1953, 24-year-old Jacqueline Bouvier was marrying America's most eligible bachelor, the junior Senator from Massachusetts. It was the social event of the year -- attended by 900 guests from Hollywood, Washington, New York and Newport society, recorded by newspapers, major newsmagazines and even newsreels.

Jackie was supposed to walk down the aisle escorted by her beloved father. Handsome, rakish "Black Jack" Bouvier had been preparing for his moment in the spotlight. He lost weight, bought a sunlamp, and most importantly, gave up hard liquor. He wanted to make his daughter proud.

But it was obvious to him that he was, as he confided to a friend, "in enemy territory." The formidable Kennedy clan was insulated. It wasn't that they made Black Jack feel unwelcome, it's just that he was irrelevant to them. Their prince wasn't joining the Bouvier family, Jackie was becoming a Kennedy.

Jackie's mother, Black Jack's ex-wife, was a different story. Janet was still bitter and furious about his philandering and the humiliation and scandal of their 1940 divorce. Some felt her best revenge was remarrying Hugh Auchincloss, the millionaire heir to Standard Oil. But that didn't assuage her anger. She really didn't want Bouvier in the spotlight. It infuriated her that her romantic and headstrong daughter was so insistent that he be front and center.

Janet couldn't control Jackie, but she could control the proceedings. Jackie was distracted by drama about the wedding and bridesmaid dresses -- 10 days before the wedding, the dressmaker's studio flooded, the dresses were ruined and had to be recreated -- and left everything regarding the rehearsal dinner and other pre-wedding activities to her mother. And Janet uninvited Jack Bouvier, excluding him from everything.

So there he was, in Newport, alone in his hotel room. Bored and embarrassed. Vulnerable. Someone saw to it that an endless stream of champagne was sent to his room. History points to Janet. But to be fair, no one made Jack Bouvier drink it.

Drink it he did. He never showed up at the church. Jackie's brother-in-law, Michael Canfield, was dispatched to the hotel to fetch him, but came back alone, reporting that Black Jack was unable to even get out of bed or get dressed.

Jackie was desolate. Pictures of her, entering the church on her stepfather's arm, give us a girl who looks more tearful than joyous. 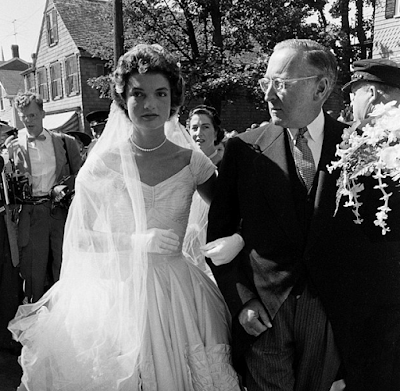 As one who has spent a lifetime studying Jackie, I find her 1953 wedding day performance fascinating. It's such a preview of her life to come. Once she became a Kennedy, she delivered. I love this shot of the couple leaving the church. Now a public figure, facing the cameras while police hold back a crowd behind her, she puts on a happy face. 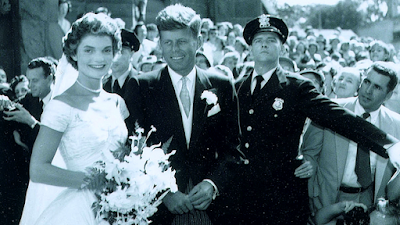 I'm sure that Saturday, Meghan Markle will perform, too. She's older than Jackie was, and an actress by trade. But I suspect that, like Jackie, she will have wished things were different and her father could walk her down the aisle. And most of all, that all this private, painful family drama didn't play out in the public eye.