I see her less, but that's OK 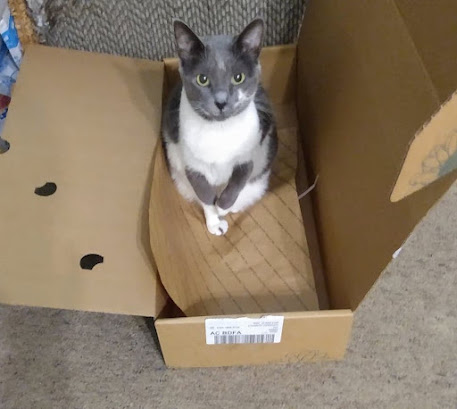 This is a perfectly representative picture of my Connie. She is always alert and engaged and usually quite happy. Here she is, contentedly owning the box my flowers came in (thank you, Snarkela!).

Ever since she came to my life in 2015, she's been more a "cat's cat." She made instant friends with Joey. He was old and failing at that time, with less than a year to live. My little beige demon Reynaldo had become grown bored with the aging, arthritic Joey who wouldn't run or leap anymore. I was grateful Connie filled his last months with companionship.

After Joey died, it was just me, Connie and Reynaldo. I didn't get a third cat. Reynaldo was a little maniac for much of his life, insisting on attention. If he wasn't getting it from me, he could count on it from Connie. His skinny body contained an enormous amount of energy. He needed both of us to keep him amused.

Reynaldo died in September and I thought it would be just Connie and me. But she spent the first full day after without him touring his spots throughout the apartment, meowing. It was like she was calling me to show me he wasn't here on the green chair ... or in the kitty condo ... or on the bed ... it was heartbreaking. She got over her grief but tried to replace Reynaldo with me. We were together all the time. She climbed into my lap as I worked on the computer. She sat on my chest as I lie around watching TV. Over night, she was either sleeping on the pillow next to me or on my butt.

The office was reopening. I was preparing for a trip to Florida. She would be the only the living being in this condo for hours at a time, for days at a time. I worried about how she would handle it. After all, I'm not only responsible for her health. Her happiness is on me, too. She's such a sweet little thing, I take it seriously.

Enter Roy Hobbs. Since Roy Hobbs joined us in October, Connie has become the Cat Queen. When she decides Roy Hobbs needs grooming, he submits to it. When she decides it's time for them to play, he plays. Never mind that he is easily twice her size and 1/3 of her age. She is the alpha, and he knows it. Fortunately, she is a benevolent despot.

Alas, I now no longer feel her soft fur next to my face when I wake up in the morning. Instead of sleeping all night on the pillow next to mine, she has returned to her favorite cold-weather spot beside the heater in the living room. But she comes to check on me if I haven't gotten up at the usual time, she follows me, chatting all the way as I go to the bathroom and then to the kitchen. She likes to cuddle a bit after dinner. But most of her time is spent keeping tabs on Roy Hobbs.

That's what makes her happiest. That's as it should be.

More than just an opportunity to sleep in 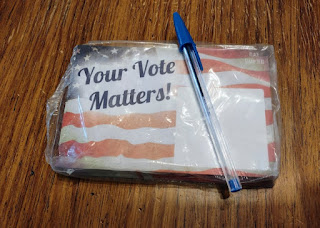 Today I celebrated Dr. King's birthday by staying in bed till noon. Then I took a long, leisurely shower and reheated wontons and fried rice. (Yum!) It was lovely, but that's not what today is about.

I also sent postcards to voters, encouraging registered Democrats to make sure they're enrolled in Vote By Mail. We live in a country where as many as 40% of voters believe taking a knee in peaceful protest during the National Anthem is shameful, but storming the Capitol with Confederate flags and MAGA hats is somehow not all that bad. It's important that men and women of good will and good conscience vote, and I'm happy I gave up a wee bit of day off toward that end.