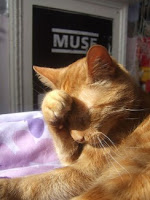 Like this kitty, I can't bear to have you look at me right now, because I have done nothing to improve my standard at living at home. Nada. Zip. Zilch. I just ate dinner, watched the game, twittered, and paid a lot of bills. Now I'm going to bed. 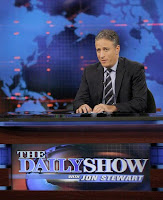 That's Jon Stewart on the President's address from the Oval Office about the spill. The Daily Show is funnier than ever these days. For those who suspected that Stewart and Colbert would be handcuffed by a Democratic President, unable to find topics to mine for humor, they need not have worried.

After riffing on Obama's lackluster speech, Stewart took off after the Fox commentators who called the President "disingenuous" for invoking religion at the end of his address. How, he asked, would they have responded if he'd attended church to pray for divine intervention about the Gulf?

Don't get me wrong -- there isn't an aspect of this that doesn't break my heart. I hate what's happening to, and will continue to devastate, our neighbors on the Gulf Coast. I hate the partisanship when we should be pulling together. I hate the apathy, the way some citizen's eyes glaze over the topic of the spill comes up. I hate that last night I got Jimmy Carter when I longed for JFK.

But I've got Jon and Stephen. Reminds me of those long ago days of Watergate, when the first 10 minutes of Johnny Carson's Tonight Show took away some of the sting with laughter.
Posted by The Gal Herself at 6/16/2010 10:05:00 PM 4 comments: 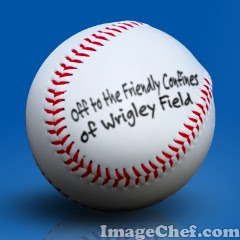 I am about to leave the office, not to return until June 21! These four days will include an observance of Sir Paul's 68th birthday, a trip to the vet, at least one workout and a possible excursion to the movies.

But the raison d'etre is tomorrow's baseball game! My nephew and I are going on our summer outing to see the Cubs play the Oakland A's. Some families have Ellis Island, mine has Wrigley Field. Once again I will point out all the signposts that bring past generations to life in that ballpark, and hopefully he'll feel a connection to those he never knew.
Posted by The Gal Herself at 6/16/2010 05:49:00 PM 3 comments: