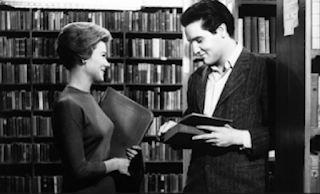 WWW. WEDNESDAY asks three questions to prompt you to speak bookishly. To participate, and to see how other book lovers responded, click here.
1. What are you currently reading? The Good Son: JFK Jr. and the Mother He Loved by Christopher Andersen. Guess what this is about. Christopher Andersen has made celebrity biographies his stock in trade. He's written at least 5 about the Kennedys and 5 about the Royals. I've read many of them. Andersen is a good storyteller, but he treats his subjects like movie stars, not historic figures. So his books are readable, but they aren't serious. Example: Andersen constantly quotes (verbatim!) intimate conversations between two people that he cannot possibly know are accurate. It's entertaining, but, well, buyer beware.
This biography begins with the two most iconic moments of John's life: the salute as his father's coffin passed and his death in a plane crash. If that doesn't grip you, you're reading the wrong book. It goes on to tell the story chronologically, emphasizing that, as the only child ever born to a President-elect, John was famous before he was born. As Ted Kennedy noted, "the world knew his name before he did." There's little that's new here, but it is involving.
BTW, there is no credible evidence -- NONE WHATSOEVER -- that John ever gave Donald Trump serious thought. Not as a fellow New Yorker, not as a friend, and certainly not as a potential President. He never wrote about him in George, as has circulated on Facebook. No one has ever been able to produce a magazine tearsheet to confirm it because it doesn't exist. The most that can be said if that they happened to sit side-by-side at a basketball game. Once. By chance.
JFK, Jr. was however fond of Bill Clinton and corresponded with him via fax (remember those?) during impeachment. He was reportedly less fond of Hillary, because she was interfering with New York politics when he was considering a dabble. They did not murder him.
I only mention this because of the way Trumpsters and the Q-Anon cult have co-opted JFK, Jr. It's silly, of course. But I guess every American conspiracy theory somehow must tie back to the Kennedys.
2. What did you recently finish reading? The Princess Bride by William Goldman. It's all here: Fencing, fighting, torture, poison, true love, hate, revenge, giants, pirates ... Everything you loved about the movie, everything you love about fairy tales and adventure stories, it's all here.
But it's also tinged with adult resignation that touches me every time I read it. For there comes a time when -- though we may still enjoy reading about it -- we no longer expect to find fiery passion and high adventure in our day-to-day lives anymore. That's real, that's natural, and that's sad.
It's rare that a book can be this funny, this accessible to a mass audience, and still this touching. Read it. Read it. Read it.
3. What will read next?  A mystery, I think.

Prayers answered, at least for now

I recently posted about a former coworker and Facebook friend, Warren. A man in his mid-50s who lives alone, he had been partying nonstop during the pandemic, even when the bars were still closed. No social distancing, no mask. I was very worried about him.

I understood a little of what motivated him. Warren has always been very gregarious, very social, very much into sharing his life with everyone he meets. And now, with the pandemic and work from home, he's isolated.

To exacerbate matters, he moved to Wrigleyville this year. It's the neighborhood that cropped up around my beloved Cubs' ballpark. For generations, it was kinda neglected. But then the Cubs started winning and, during this century, it's become younger, more single, and more upscale. It's a lot of bars. (I remember wandering around after a game with my then 19-year-old nephew, and I could see in his face that he thought Wrigleyville was better than Disneyland.) It's filled with rather privileged young people who are sure Covid will never happen to them. Wrigleyville is not where you go to avoid temptation.

Today Warren posted that he realized that he's been "acting like a frat boy" as he tried to escape his "fear and anxiety." I was so happy to see this! He said he's embarrassed by how he's been acting and has reached out to a local church for socially-distanced volunteer work.

I know how hard it is to turn over a new leaf, and I'm not expecting this new attitude to change his life 100% overnight. But I'm glad he sees the problem. Recognizing it is the first step to solving it.

Maybe you had to be there 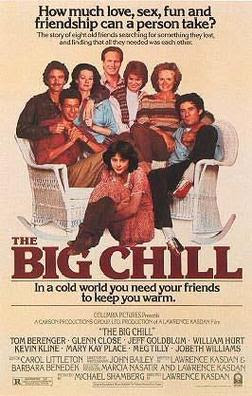 I did it again. I closed my eyes for "a minute" after work and woke up nearly four hours later! So now I'm wide awake and have turned to my DVR for comfort and entertainment.

God, I love this movie! I haven't seen it in ages, yet I find I recall it nearly scene-by-scene. I find myself saying some of the dialog with the characters. My favorite scene is when Sam walks in on Nick watching an obscure old movie on the late show.

"What's this?"
"I'm not sure."
"What's it about?
"I think the man in the hat did something terrible." And all the men onscreen are wearing hats.

OK, maybe you had to be there.

Anyway, apparently this movie is an acquired taste. On message boards, I've learned that Millennials don't tend to like it. The characters are too rich and too self absorbed and their obsession with pot seems quaint. I get that, too. Maybe you had to be there.

PS Tom Selleck was originally supposed to be in the cast but had to drop out because he was filming Magnum PI in Hawaii and couldn't make it to Los Angeles in time. Writer/director Lawrence Kasdan tweaked the character of Sam (mustache, detective show where he drives a cool car) as a needle or an homage to Selleck. As a big Magnum fan, I really enjoy the touches.

I say "no" to this prompt. With Marjorie Taylor Green, QAnon and Trump apologists being both ubiquitous and toxic, I'd rather accentuate the positive.

This is the earliest available photo of Major Biden as a puppy. The Delaware Humane Society says he is the one at the top. 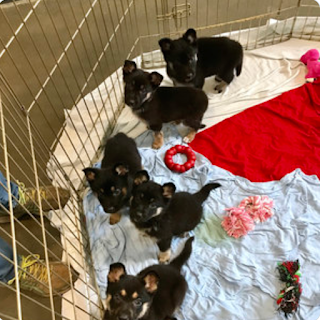 This litter was found living outside and, being puppies, they'd gotten into something they shouldn't have. The spent their first days at the shelter on fluids. They bounced back, but needed socialization before they could be adopted. Ashley Biden saw a Facebook post about the litter, contacted her dad, and on Easter Sunday, 2018, he became Major's fairy dogfather. Months later, Joe and Jill officially adopted their new family member.