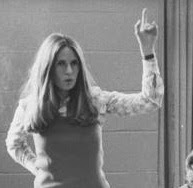 I hate my oldest friend's cousin, Sharon. There, I said it. And it felt gooood.

My oldest friend moved to California -- more than 2000 miles away -- to be near her only blood relative. That's how important Sharon is to her. The move has been a disaster, for a variety of reasons that I've chronicled on my blog but simply don't have the stomach to revisit right now.

Anyway, Sharon, who originally encouraged this badly-planned move and was so happy about she wept, has been no support whatsoever to my oldest friend now that she's there.

My friend has had two major surgeries on her elbow this past year, and her cousin hasn't once driven in to see her during her recuperation, much less visited her in the hospital. My friend is depressed and unemployed (well, on disability) and she needs encouragement and support!

Sharon has also refused to watch my friend's troubled daughter, even for a few days, to give my friend a break. I'm not kidding -- my friend has asked her cousin to help with her daughter and Sharon has actually said, "no."

Sure, Sharon goes on the occasional shopping trip with my friend and has her over for a late lunch/early dinner every Sunday. But everything has to be in her neighborhood, which is 90 miles away from Beverly Hills, where my friend lives.
Most telling, I checked Sharon's Facebook page and saw lots of pictures labeled, "Family." My oldest friend and her two kids don't appear in any of them.

I am so sorely tempted to call the bitch and say, "Yes, my oldest friend is a neurotic mess and her kids can be completely awful. But she's your cousin and she needs you! Time to step up! You're not only her only living relative, you're all she has within 2000 miles and you encouraged her to make this move. Do the right thing!"
Posted by The Gal Herself at 11/29/2011 09:34:00 AM 1 comment:

My best friend is a foodie, so I committed myself to giving him a homemade Christmas gift. Since he knows I am domestically challenged, I know this will mean a lot to him.

First step: I found the easiest recipe ever. Bonus: it's made with tons of peanut butter, which my friend loves.


Peanut Butter and Jelly Cookies
1 cup peanut butter
1 cup sugar
1 egg
1 teaspoon vanilla
2 tablespoons any flavor jelly or fruit preserves
Preheat oven to 350º. Mix peanut butter, sugar egg and vanilla until well blended.  Drop by spoonfuls onto an ungreased cookie sheet.  Make a few holes/dents into the top of each cookie and fill with the jelly.  Bake for 8-12 minutes or until lightly golden brown.  Cool. 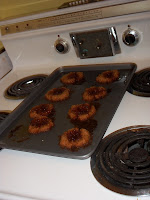 Second step: Buy ingredients. I thought that organic, all-natural peanut butter would be best. I was wrong. Here's why:

Third step: First batch. So runny, oil actually spilled off the cookie sheet onto the floor when I took the cookies out of the oven. 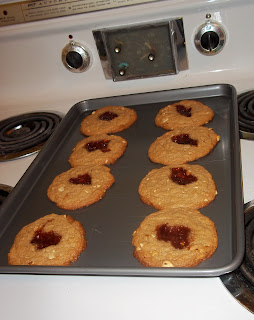 Fifth step: Perfection! Well, almost. The holes I made for the preserves were too deep and the jelly seeped through one or two of the cookies. I must try again.

But I admit I am sick of the process now. It took me more than two hours to whip up these two batches yesterday. (Yes, I know it's pathetic. One person commented of the recipe that her 7 year old daughter makes these cookies all by herself. Gulp.) And I am beyond disgusted by the thought of peanut butter and sugar right now. Maybe I'll experiment more later today, but not now.
Posted by The Gal Herself at 11/29/2011 08:34:00 AM 2 comments: