Today's happiness -- My girlcat. On Day 4, I wrote a valentine to  Reynaldo. Today it's Connie's turn.

She is sweet. This afternoon, I took a nap, and when I woke up, there she was, at my feet. It was like she sensed I had the blues and needed a little support.

She doesn't beg like Rey does. She just looks at me soulfully and hopes I will do the right thing.

She's our first line of defense against flying insects, the mesh laundry bag I use to wash my linens, and any other threat she can spy.

And she chats and likes to give kisses.

Each day in August you are to post about something that makes *you* happy. Pretty simple. And, it doesn't even have to be every day if you don't want it to be. It's a great way to remind ourselves that there
Posted by The Gal Herself at 8/16/2020 09:02:00 PM 1 comment:

Of course I'll forgive her

I'm in a mood. Maybe it's because my Cubs just lost their consecutive third one-run game. Or perhaps it's because I don't approve of the movies TCM scheduled for Cary Grant day on Summer Under the Stars. (What? No Penny Serenade?)

Or maybe it's because I'm still pissed at my oldest friend, and I don't know what to do about it. I love her so much and don't know where to put all these feelings.

Over 4th of July weekend, she and I had a great conversation. It was lively and funny. I felt so grounded in the world because I was so connected to her. She's been my friend since Kindergarten, and our relationship is important to me.

During that call I confessed how scared I was about the lump in my breast. At that point I had 2 1/2 weeks to go until the mammogram and was terrified. She was comforting and loving.

I wanted us to discuss whether I should go to my niece's bridal shower. My oldest friend knows my niece and my sister, and how complicated my relationship is with the latter. And the mammogram and lump! She knows how, after going with breast cancer with my friends Kathleen and Barb, for me it's not a question of "why me?" it's "why not me?"

She's unemployed. It's not like I'm keeping her from anything. I'm just not important. This hurts.

Finally, on July 28, she wrote me a chatty email about how excited she is about her new phone. Now she'll be able to tell who's been calling her!* She detailed her ongoing medical issues, filled me in about her writing, and explained that she's had problems with depression because her doctor switched her meds.

I get depression. I know it's real, I know it can be debilitating. If that had been the end of her correspondence, I wouldn't be upset.

Then she goes on Facebook and posts something chirpy to a former coworker about how delightful her life is, now that she's "retired." Really? With me, she's filled with self loathing because she was let go, can't find another job, and is unable to pay rent or make car payments. With me, she's crippled by depression and barely able to function. On Facebook she's happier than she's ever been in her life! (And too busy and popular to look at the six -- count 'em, six! -- photos of my niece's bridal shower.)

Last week, her aunt died out there in So Cal. She texted me today that auntie's ashes will be buried in here in Chicagoland when "it's safer to fly." Oh, goodie! She's going to expect to stay with me, isn't she? Maybe I don't want houseguests from a corona virus hotspot, during Covid19. Maybe I don't want houseguests at all, since my den is such a mess.

Maybe I want to feel like a part of this relationship, and not just a sweater she only reaches for when she feels chilly. 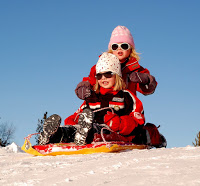 She's my funny friend. My touchstone. The one I went sledding with when that teeny-tiny slope still looked like a big hill.

Of course I'll forgive her. But first I have to forgive myself for being sooooooooo fucking angry and hurt.

And, really, TCM. You couldn't give me Father Goose on Cary Grant day? Cary himself said it was his favorite performance!

*This smacks of plausible deniability. She wants me to excuse her not picking up.


1. What makes it easy to talk to someone? It helps if the person is open and engaged. My coworker Kara always says, "I hear 'ya!" That makes her my favorite.

2. Have you ever had a great conversation with a complete stranger? More than a decade ago, I had the best seatmate on a flight to (I think) Atlanta. She worked for Cook County, specializing in elder abuse and was often appointed by the court to represent those who cannot handle their own affairs. At the time, my favorite uncle was deteriorating rapidly and, I was sure, being fleeced by his caregivers. There was little I could do about it, since both my uncle and my mother were convinced the caregivers were kind and wonderful. I unburdened myself about the situation and she listened patiently. She told me that what my family was going through was sadly common, that judges know it when they see it, and once a guardian/administrator is appointed, things would get better. I took comfort in that, and it turns out she was right. The following winter, a guardian was indeed appointed and, it turned out, told the court my uncle was being "exploited" and that his caregivers had helped themselves to his checking and savings accounts. If it hadn't been for that guardian, my uncle would likely have lost his house, too.

5. Who is easier to talk to – men or women? Friends: women. Strangers: men. In striking up small talk, I find it easy to talk sports.

6. What is your favorite place? 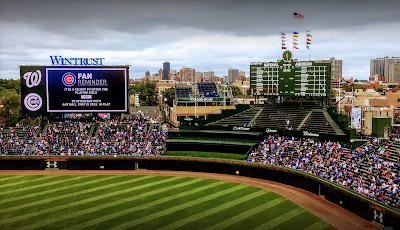 7. What is your favorite place in your home? I really do enjoy my morning shower, singing with the shower radio.

8. Would you most want to live in a city, a suburb or the country? I want to live as close to the city as possible.

9. What is special about the town you live in? This sign is on lawns all over town, and it sums it up. 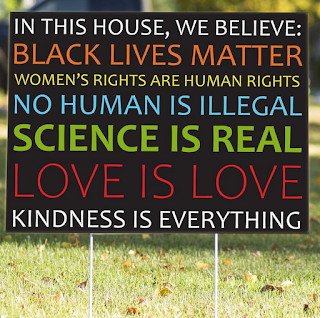 10. How much time do you spend in nature? I'm no nature girl. However, I live with cats and with their independent feline spirits, they bring nature indoors.

11. Do you make up a dinner plan for the coming week? Kinda. In as much as frozen meats have to be defrosted in advance. This week, I'm having beef.

12. Do you make up a grocery shopping list and stick to it when shopping? I make a list. I don't always refer to it in the store, but I find the act of writing it down helps me remember.

13. What is one thing that you always buy, but never write down on a list? Gerber baby food. My cat Connie's meds melt so well into the turkey.

14. Is there anything that you always think you are out of and come home with it to discover you already have a year’s supply on hand? For a while, I was buying barbecue sauce all the time. I've stopped. Now I will run out.

15. Do you get your groceries delivered? I did. I don't anymore, because stores are so often out of what I'm looking for and I have to punt. My nephew has been working for Instacart this summer, and he reports that people who have their groceries delivered are good tippers.