When the going gets tough, the tough go to the movies

I have always been afraid of clowns. The summer when I was 7, I saw The Greatest Show on Earth. A doctor is unjustly accused of killing his wife and avoids prosecution by escaping and joining the circus. He always wears his clown makeup so he won't be recognized and taken back into custody. I entirely missed the "unjustly accused" detail and was terrified of his pointy "I-killed-my-wife" smile. (BTW, I may be the only person in the world who grew up afraid of Jimmy Stewart.) 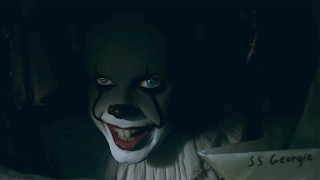 And so, on Sunday, I went to see IT. Stephen King's Pennywise is the ultimate in clown horror. I didn't misunderstand Pennywise. I got it, loud and clear, when said he liked scaring children before he eats them because fear makes them taste better. He's a voracious, sadistic bastard who is aided and abetted by adults, who either ignore their children or terrorize them in their own way.

I was frightened about my friends in Key West. I tried to watch baseball, but my darling Cubbies were losing ... and to the BREWERS in these all-important late season games. I needed to thoroughly distract myself from real life. And damn, if Pennywise didn't do it for me.

Sunday, terror was my mental sorbet. And I'm grateful. 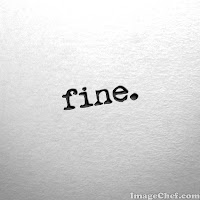 My friends, Henry and Reg, are, in a word, "fine." Have you ever heard a more glorious word?

Instead of evacuating Key West, they rode out Hurricane Irma. They've been incommunicado since Friday night. I can't begin to describe what a frightening and anxious four days I've had.

Somehow today, Reg got word to his father in Maine that he and Henry are "fine." Dad told Reg's sister, who posted it on Facebook. I spread the word to Henry's friend, Katie.

I'm worried about those guys, of course. I can't imagine what their lives are like. Few passable roads and bridges. No power. No gas. No fresh water. I just heard that electricity isn't expected to be restored to Key West until the 22nd, a week from Friday.

Is their house OK? What about their car? And the dogs? Do they have enough food? Are they able to wash and brush their teeth and flush? I mean, it's hot and humid down there!

Right now, all I have are those four letters: F-I-N-E.

It's a relief, but it's not enough.