"Life sucks and then you die." That's the phrase that goes through my mind this morning as I watch an episode of Biography about Princess Diana. Beautiful but insecure, adored by the public, hunted by the press, betrayed by her husband ... her life was cut short in the most tawdry way -- by a drunk driver. She never got to see her sons grow up. She never knew contentment. Her life was a tragedy.

As my heart go 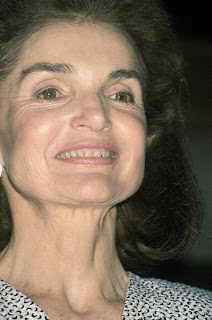 es out to this poor girl (and Diana will, eternally, be a poor girl), I remain in awe of "America's queen," Jacqueline Bouvier Kennedy Onassis. Like Diana, she was both a loving mother and a betrayed wife … a paparazzi target and the subject of international scrutiny … a damaged daughter of divorce and a Daddy's girl who had a turbulent relationship with her mother. Unlike Diana, she was an eyewitness to one of history's most famous murders, she cradled her husband's bloody head in her lap, and had to honor him with a state funeral as the world watched. She also had 5 difficult pregnancies in 10 years, with only two of her children surviving to adulthood.

But Jackie was made of very stern stuff. She lived her life the way she wanted to, despite the disapproval of her formidable in-laws or (when she married Onassis) the entire world. Instead of alternately fleeing and wooing the press the way Diana did, Jackie took the paparazzi to court and got a restraining order. She worked before marrying JFK and went back to work after her children left home, finding fulfillment as a book editor. She always put her kids first and saw them grow up and embark on successful careers of their own. She lived to hold her grandchildren. She found, if not great passion, then love and companionship with a man who shunned the spotlight. This photo was taken of her near the end of her life, well after she had passed her 60th birthday. It makes me sad that there is no similar picture of Diana as a mature woman who could luxuriate in having made it through the bad times.

There was no scandal or gossip attached to Jackie's passing, of natural causes at the age of 64. She even died in her way own way. She checked herself out of the hospital and went home, to be (as son John later said) surrounded by her books and the things she loved. There were crowds outside her Park Avenue apartment, but her death was private and attended by family and friends.

No matter how you measure a life, Jackie's must be considered a triumph. Others remember her for class and beauty and style. Yes, she exemplified all that. But it's her personal integrity and her guts that inspire me. "To thine own self be true." That's a helluvalot more positive than, "Life sucks and then you die."
Posted by The Gal Herself at 2/14/2009 10:32:00 AM 1 comment: Links to this post