Just watched the penultimate episode of NCIS and am both eager and apprehensive about next week's finale.

The writers have been slowly, surely building the tension and I can anticipate just enough to make me crazy. A couple weeks ago, as part of a case involving a judge, the NCIS team interrogated a polygrapher. She did a demonstration on Gibbs, which he aborted because it was dopey and annoying ... and because he didn't want to answer her question about whether or not he had committed a felony. After all, we know that decades ago Gibbs used his exceptional skill as a sniper to shoot the Mexican drug runner who killed Kelly and Shannon, his wife and daughter.

This week Abby was sent to a symposium on forensics and cold cases in Mexico and was given a particular cold case to use as an example. It was the 20-year-old murder of a drug runner. Shot from a great distance with a high-caliber weapon. Naturally Abby figures it out -- she's very good at her job. But it breaks her heart. She and Gibbs are like family, "closer than family," as she likes to say. She is his favorite, his surrogate Kelly. She basks in his affection and has imbued him with super-human powers. As she often says, "He can do anything! He's GIBBS!" 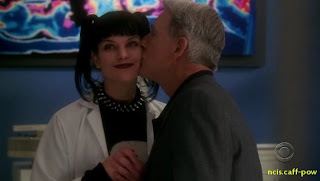 He knows she has figured it out. She knows he knows. She asked him if he will still love her if she does what she has to do with the information. That's where the episode ended.

Clearly Gibbs was set up. It was no accident that Abby was sent to this symposium or that, out of all the unsolved murders in Mexico, the one she's handed is the one Gibbs committed.

According to the rumor mill, someone dies in next week's shocking finale. I think the one to go will be Allison Hart -- the icky lawyer who fell in love with Gibbs. But I fear it will be Abby.

Pauly Perrette, the actress who plays Abby, is one of the main cast members whose contract hasn't been renewed. The others -- Tony and McGee -- aren't as involved in this plot line as Abby. (Representatives for CBS have reassured us that they have "taken care of Mark Harmon," so we know that Gibbs isn't going anywhere.)

It would be sad for our poor Jethro to lose Allison because he's been so unlucky in love. Losing Abby would be devastating for him. And for me, too. For as one who longed for a positive daddy/daughter relationship, I find Abby and Gibbs very comforting. Reassuring. Something I'm still looking for.
Posted by The Gal Herself at 5/12/2010 09:42:00 PM 3 comments:

Here's what I want for myself today ...

1) Discipline to work out at lunchtime today. I'm finally over the Vicodin and I have the OK from the surgeon who is working on my legs. So now all I need is the will. Accomplished!

2) Energy to do some housework this evening. My niece is coming over Sunday to help me organize my living room, and because I know this is the plan, I have been neglecting to do anything, saying to myself, "I'll take care of that when she gets here." We're getting to the point where she is going to have to wear HazMat coveralls. Accomplished! Finished sorting laundry (I see 5 loads -- blues, blacks, reds, whites-to-be-bleached and everything else -- in my future) and changed the linens in my bedroom and bathroom.

3) A Cub victory. I know it's still early in the season, but I'm beginning to get a little nervous about the fielding and the bullpen. Accomplished! Thanks, Guys!

4) Lee DeWyze to make the final 3 on Idol. He's a hometown boy, he's got a neat, bluesy voice, and he's cute. Now that he's made the Final 3, the Tribune reports that the AI cameras will follow him to Wrigley Field and film him tossing out the first pitch.

5) Serenity. I'm feeling a little unsettled these days. It may be all the meds flowing through my system, it may be the lack of endorphins because I haven't been working out, it may be because I'm obsessed/saddened by my resemblance to Elena Kagan … the skies of my soul are a bit gray these days.