I want this very much 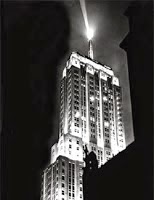 I love The Palmolive Building on Michigan Avenue. It's a beautiful, lovingly restored art deco building and that light you see is called The Lindbergh Beacon. It dates back to the 1930s when it helped pilots fly into Chicago from over the Lake. Of course with today's air traffic controllers it's no longer necessary, but it still shines every night, rotating a full 360º.

Quite possibly the coolest condo in the building is now up for sale! It was actor Vince Vaughn's bachelor pad, and now that he's a sedate married man and a father, he's put it on the block for just under $15 million.

What will my $14.9 million get me? The top three floors. The 35th floor will be my bedroom and personal bath, as well as four guest bedrooms and two more bathrooms.

The elevator won't stop at 35, though. The bedrooms are connected by stairs to the living room on the 36th floor. That's where my foyer (and elevator entrance), living room, dining room and kitchen (including butler's pantry) are.


Another set of stairs takes me to the the 37th floor, the penthouse. That's where my game room is. Computers, big screen TV, pool table, and bar. My private terraces will give me unparalleled views of Michigan Avenue and Oak Street Beach.

Best of all, the 37th floor was, for many years, the office of Playboy founder Hugh Hefner. I like this idea of this unrepentant 1970s vintage feminist putting her feet up there.

In the late 1980s and early 90s I clocked a lot of hours volunteering at the animal shelter. One of my duties was watching how prospective pet parents interacted with the adoptable cats. I was asked to do a little prescreening and raise a red flag if someone expressed outmoded animal care ideas.

"Naturally I'll let him out at night. Cats need to roam."
"I don't want to get her fixed until she has at least one litter. It's not fair to her to not let her be a mother."
"I'm going to keep him in the basement because we have mice."

Of course that was 20 years ago. We have evolved as a society and generally people recognize how dangerous it is to let our pets just "roam," and that it's safe and preferable to spay/neuter a puppy or kitten before they are old enough to mate, and that domestic cats should be companions, not "mousers."

I'm hoping that, as a society, we evolve the same way about childcare. And that whole idea that no one can tell parents how to raise their kids? It's not true. We have laws that protect children from bad parenting, as we should.

And it's illegal to hit a child so hard, or so often, that the kid requires medical attention. It just is. Even if you are the parent. It doesn't matter if your parents disciplined you that way "back in the day." We know better now.

We don't want a child to stop doing something because they fear corporal punishment, we want them to stop it because they know it's wrong. It's not about obedience, it's about values.There are many long-term studies -- conducted long before the current NFL scandals -- that bear this out. Children who were spanked often can grow up to be more aggressive and have an extrinsic morality.

I hope all these people who still insist that it's okay to "belt," "whup," "beat" or (a new one I just learned yesterday from my friend Tom) "chancleta" kids because their parents did it to them will open their eyes and their hearts. Saying that the way you were raised wasn't perfect doesn't mean you don't love and don't honor your parents. It means you recognize that they were human. Second guessing some of your own parenting decisions doesn't mean you don't love your children. It means you can forgive yourself for being human and that you're willing to change.