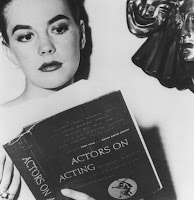 1. What are you currently reading? Murder on the Orient Express by Agatha Christie. There are few movies I've seen as often or enjoyed as much as the 1974 film version of this book. Dame Agatha herself saw the movie and approved, which is indeed high praise! So when I found the book on the shelf of my local library, I snapped it up. I want to see if the movie I'm so fond of tracks with the original work.

So far it does. Knowing whodunit does not diminish my enjoyment. As Poirot interrogates the passengers, I hear Albert Finney as Poirot and the cast of the '74 film (especially Vanessa Redgrave's Mary Debenham and Wendy Hiller's Princess Dragomiroff). It's like spending time with dear old friends.

2. What did you recently finish reading? Natalie Wood: A Life by Gavin Lambert. The lady was complicated. Beginning at the age of 7, and until her second marriage to Richard Gregson at age 30, she was the main breadwinner of her family -- Mom, Dad and kid sister, Lana, all lived off of her. She felt their love was conditional, based on her working (and frankly, I'm not sure she was wrong about Mom and Lana; Dad is a more sympathetic character). Then she married a successful producer/agent, had a baby, and wanted to concentrate on being a wife and mother. When she and Gregson divorced and she remarried Robert Wagner -- by now he was a successful TV star -- she still thought being a homebody was her greatest ambition.
But she was like a firehorse, pawing at the dirt when she hears the bell. After a few years, she wanted to go back to work. Not for the money, not for the fame, but for the satisfaction it would give her. But there was a desperation to her quest to revitalize her career. She was now over 40, a dangerous age for beautiful Hollywood actresses.
There was guilt attached to leaving her little girls. There was her husband, who was supportive of her theoretically, but not entirely in practice. He appreciated her talent, but he liked having her home, too.
She couldn't sleep without sedatives. She liked wine too much. She had a dangerous penchant for "swishing her tail" (a friend's euphemism for Natalie's flirting) when she felt ignored or unappreciated. Her beloved father died, and her mother and sister began leaning on her more and more for money and attention.
This was the woman who went overboard that fateful Thanksgiving weekend. A woman bedeviled by demons.
But she was also hopeful about the future. She was about to make her stage debut in Anastasia the following February and was enthusiastic about the wardrobe and casting. If the play had been a success, she could live a structured and comparatively normal life with her family for the run of the show. She was looking forward to coordinating her personal and professional lives.
She also had a loving, supportive network of friends -- including Wagner's adult stepsons from his second marriage to Marion Donen  -- and I liked her for that. She clearly had an open and generous spirit. I also admired several of her films. So I enjoyed this portrait of her as a woman and an artist.
I don't know that I recommend this book, though. Gavin Lambert, who actually knew Natalie, spends an inordinate amount of time on Maria, Natalie's mother. I get it: she was a monster. Maria Gurdin shoved her little girl into a career and then proceeded to live through her, controlling her daughter largely with guilt. But this could have been established in far fewer pages than he devotes to this thoroughly unpleasant woman.
3. What will read next? Fiction. Not exactly sure which book.