I learned something new ... or, perhaps, old 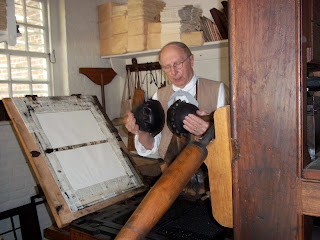 Behold the Colonial Williamsburg Printing Office and Post Office. Watching all the work that went into printing a newspaper back in the olden days was fascinating. Those dark round balls are rocks, wrapped in cloth and covered in leather. Mr. Printer Man dips them in ink and then rubs them evenly over the plates. Then he presses the paper onto the plate. 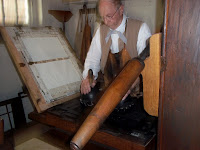 He told us that no one threw a newspaper out in those days, and certainly didn't share them. If you were lucky enough or wealthy enough to get a paper in the old days, you saved it and kept in your own archive. Books were even more labor intensive and therefore more rare.

Thomas Jefferson was a great lover of books and collected as many as he could find. When his family home burned down in the 1770s, it was the loss of books that upset him most. He set about amassing a new collection of books and was so proud of them, attached so much value to them, that he took the unusual step of getting two separate insurance policies -- one for Monticello and its contents, one solely for his personal library.

Saturday 9: Ain't Too Proud to Beg


1. What was the last thing that you begged for? For my cat Reynaldo to knock it off, to quit with the meowing and the destruction. To just please, be a little human and give me a break. Then I realized a new that he's not human, governed only by feline logic, and know resistance is futile.

2. Have you ever lost a best friend after a fight? It wasn't a "fight," really. But in mid-February, after knowing one another for decades, Kathy's transgressions finally reached critical mass.

3. When was the last time you just wanted to be invisible? On a plane, soon after the New Year 2012 dawned. I was awakened by the incredibly loud snores of a fellow traveler. Then I realized, that noisy snorer was me.

4. Which room of your home tends to be the messiest? Right now, every room but the den. Because the door is closed and I never go in it. The rest of the place is an explosion of shoes and laundry and souvenirs (I just got back from vacation).

5. You are to be locked in a room forever with a celebrity. You get to choose. Who do you pick? I have two different choices, depending on my mood. For passion, Bruce. The Boss. A fine figure of an AARP member and a sensitive and smart artist/social commentator. For fun, Bill Clinton. I have always been impressed by his expansive intellect and amused by his joie de vivre. One thing for sure, no matter which "roomie" I got, I wouldn't be bored. (Here's something to tip the scales in Bill's favor -- at some point the Secret Service would come looking for him and get us out of that locked room.)

6. Has someone ever left another person to be with you? No.

7. What’s been kind of a drag for you lately? Family. My kid sister is playing up the martyrdom thing again and it makes me tired. (What? You haven't heard of my kid sister? She's a lunch mom who works two hours/day, nine months/year and has only one child -- a 12 year old -- at home, yet she's without a doubt the busiest, most beleaguered woman in the United States!)

8. How are you different from your (current or most recent) significant other? He smoked and was, at his most open spiritually, agnostic.

9. What is the most perverted thing someone has ever said to you? "Do you ever wonder how it feels to have a man's tongue in your ear?" I was a school girl and he was a relative. It was only the sad beginning of his decades-long harassment.