THE THIRTEEN
MOST COMMON NAMES
FOR DOGS & CATS

When I first tackled this topic, in 2008, the most popular names for dogs and cats were Max and Samantha. But styles change. According to the folks at babynamewizard.com, here are the most popular names as reported by veterinary clinics in 2012. Max remains, but Samantha goes by the wayside.
1. Bella
2. Max
3. Buddy
4. Daisy
5. Bailey
6. Coco
7. Lucy
8. Charlie
9. Molly
10. Rocky
11. Tiger
12. Smokey
13. Shadow
My cats are Joey, Charlotte and Reynaldo. Do you have pets at home? Do their names appear on the list?

I want to know what's going on. My best friend has been unemployed since August 1, has had precious few interviews and his leads are dwindling. When I hear from him, he's either depressed and withdrawn and all Eeyore, or he's regaling me with tales of his latest vacation.

Huh? How is someone who hasn't worked in more than 9 months affording to take all these trips? Thanksgiving in Puerto Vallerta. Easter in New York. He just got back from the New Orleans JazzFest and has a trip to the Grand Canyon on the calendar. He and his family would also like to go to Southern California but that's still up the in the air. Not because of money, mind you, but because his two now teenaged girls have so many activities planned for summer.

He must be taking money from his father-in-law, a very wealthy and not very nice man. Whenever my best friend does this, it's at the behest of his wife. Her family has money and she doesn't see why she should do without the things that her sister has. There's something to that. Every year her father has to give money away to family to avoid paying taxes on it anyway ... why not give it his kids?

Except that whenever he does take her family money, it seems to numb his soul. And, since when he's not telling me how much fun vacation was, he's telling me how little self confidence is left, I worry about him. A lot.

I love the little sumbitch 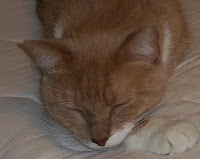 My cat Reynaldo spent a month tormenting me. Ever since I came home from vacation on April 5, he has been even more rambunctious than usual ... knocking over even more knick-knacks, running around even more, howling even louder, waking me from a sound sleep even more aggressively and, most disturbing, peeing ON my dining room table. He's ruined important papers and photographs and souvenirs with cat urine. He made such serious eye contact with me, it was as if he was angry. But really, can an otherwise sweet cat with a brain the size of a plum pit hold a grudge for weeks? I don't think so.

So I took him to the vet. During the preliminary exam, the vet predicted Rey's problem would turn out to be behavioral. After all, I could tell there is no blood in his urine. His eyes are good, his heart is strong, his gums are the right color, and he's social. OH, BOY! Is he ever social! Not only had he began interacting with the other cats, he was not leaving me alone, and usually cats who aren't feeling well mask their symptoms and keep to themselves.

Just to be safe, the vet took a urine sample from Rey and my little feline friend and I waited in the examining room for it to be tested. All the while, Rey never calmed down -- flipping from side to side on the table like a salmon in the bottom of a boat, leaping off the table and checking out the room. I know it sounds counter intuitive, but I actually wanted him to be sick, because behavioral issues in cats are notoriously hard to treat, but I was doubtful.

The vet came in and was as surprised to report that there were crystals in Reynaldo's urine, indicative of the early stages of feline lower urinary tract disease. So he was sick after all! He now requires prescription food, and will for the rest of his life, but that's OK. We know what's wrong and we can fix it. He's already been on the food for more than a week and seems to be feeling better.

The vet shared that he was surprised because my manic little cat was so lively and interacted with my sooooo much. As though he was trying to get my attention, yelling, "FIX ME!" This is "unusual," he said, elaborating with, "Your cat is is unusually bonded to you."

He is! Some mornings, as I leave for work, I hear him on the other side of the door as I'm locking it and then walking down the hall. He calls out to me, not wanting me to go. It kinda breaks my heart. But he is 9 years old, which is too old for plain old, garden variety separation anxiety. He's not alone during the day -- he has my other two cats, Joey and Charlotte. On the other hand, he's not going to outgrow this. This is just who he is.

Early in April, when I was at the end of my tether with Rey, I had a consultation with a pet psychic recommended to me by Snarky Pants. And everything she told me echoed the vet. She told me that Rey was uncomfortable and was trying to make me HEAR HIM. Even though it's not typical feline behavior, it's my Reynaldo.


Day 8, Wednesday: A piece of advice you have for others. Anything at all.

"Don't listen to what they say. Watch what they do." It's the best piece of workplace advice I've received, and I'm happy to pass it along.

Management often makes pronouncements that are filled with rosy-sounding crap phrases, all the while doing things like eliminating holidays (What? We don't get President's Day off this year?) and suddenly paying closer attention to how many pencils and paperclips you order. When that starts happening, get your resume in order. No matter what they say.