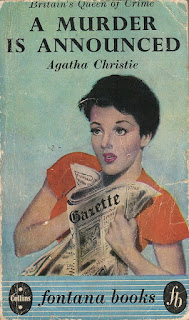 *Grab a book, any book.
*Turn to page 56 or 56% in your eReader
(If you have to improvise, that's ok.)
*Find any sentence, (or few, just don't spoil it)
*Post it.
From A Murder Is Announced by Agatha Christie. Everyone in a small British town (Chipping Cleghorn, I love that name!) reads the ads placed by their neighbors in The Gazette.  Amid the help wanted's and the puppies for sale, they find one announcing a murder. At 6:30 PM. At an exact address. The woman who lives at that address didn't place the notice. Everyone assumes it was a prank or a game and her neighbors assemble at her home at 6:30 to see what happens.

Instead of good fun, something terrifying occurs. The lights go out, shots are fired, and ....  Inspector Craddock is called. He begins questioning the attendees. One guest points a finger at the household help.
From page 56:

"Mitzi's mixed up in it! Awful temper she has, and oh! The airs she gives herself!"

I feel sorry for Brian, our condo board president. He has become the leavening influence in the battle between me (the secretary) and John (the treasurer). Or, as I've come to think of us, Norma Rae and Ayn Rand.

A little background: For at least 10 years, this building has had a rule against renting. The reasoning? The more rental units a condo building has, the more expensive the insurance on the common areas. There is also some evidence that renters are not as careful about their homes as owners. I must admit I don't care whether or not we have renters. I was a renter for most of my adult life and can attest I am just as lazy a housekeeper as an owner.

But the "no rental" rule is in the by-laws. When he buys in our building, every owner agrees to live in his unit. And I believe in rules being fairly enforced. Nearly 30% of our building is now illegal renters. That's not fair to all us who follow the rules. Plus, there's a security problem: our management company does not have contact information for these renters because they've rented illegally and the landlords don't admit they're there. This pisses the village off, because there's no resident to contact in case of emergency.

I came on the board back in April, and we talked about the problem back then. It wasn't a priority, really. We had more immediate problems -- a leak in the ceiling over the stairwell, a balky coin slide on one of the dryers in the laundry room, a problem with the water meter reading ...

Last month we met again to discuss the budget. Obviously we need more money. We always do, if we want to do everything that needs to be done around here. The matter of renters came up again. Our management company said a way to bring more money in is to fine the owners who rent. We can legally demand to see the leases and fine them for all the months they've been renting. We can assess them in advance for the $175 move-out fee. And we can set a date certain that their tenants have to be gone. If the renters remain, the owners can be fined even more.

"Let's do it!" Our treasurer was so enthusiastic. "Ayn Rand" is all about personal responsibility. The owners knew they were breaking the rules. He wanted to send out a letter, dated October 31, that deemed all renters were evicted as of November 30.

"No!" countered "Norma Rae." I reasoned that was unnecessarily punitive to renters, who signed their leases in good faith and don't realize they are living in illegal apartments. 30 days to find a new home  when there aren't many apartments for rent? At a time when kids are still in school? Over Thanksgiving?

No fucking way am I signing off on that. And no one can make me.

Besides, 60 days puts us to Christmas/New Year's. And, undoubtedly, snow. I will not literally throw my neighbors out into the snow. Oh, and by the way, if we're all about "personal responsibility," then as a board we have to own the fact that we didn't act on this problem in April. I told him that, if he had wanted to send a letter out on May 1, having everyone out on June 30, I would have been amenable. But we didn't bother to investigate our options until October. Shame on us. Now we have to accept the responsibility of that oversight.

I suggested the letter go out January 1 and give the tenants until August 15 to move out. Now I know that was too generous. I really wanted June 15, so the later date was just my negotiation tactic.

As the emails between Norma Rae and Ayn Rand got more heated, our president weighed in. When I received the message that began, "Gal, bless your heart ..." I knew I wasn't going to get everything I wanted.

We're working with the lawyers on a letter that will go out December 1, giving the owners/tenants notice that all renters have to be out by May 31. The board will collect a lot in fines and penalties, which will enable us to make some of the renovations everyone wants without an increase in assessments (which no one wants).

And we'll all live happily ever after.