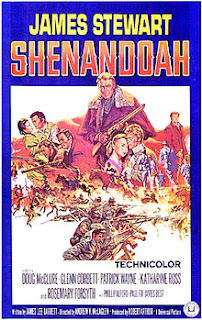 I got this idea from The Girl with the White Parasol. She brought up the topic of Fascination Films, defined as "films I don't consider great, hell maybe I don't even like them all that much, but they fascinate me."

Shenandoah (1965). James Stewart stars as Charlie Anderson, widower and patriarch of a Virginia family, dedicated to keeping his clan out of the Civil War.

I don't like Westerns as a rule. But every time this one turns up, I watch it. I have seen it so many times, in fact, that no matter what scene I find on TV, I can pick up the movie immediately and follow it through to the end. Yet I'm not sure I like Shenandoah.

As Charlie Anderson, Stewart is completely authentic. He's so good at being the center of this family that it takes you a while to realize what a hollow moral center the movie has. We're talking about the Civil War here: slavery and secession. How is a man heroic for not taking a stand on that?

Since the movie was made in the mid 1960s, I am guessing that it may have been crafted as a well-meaning argument for ending our involvement in Vietnam. But viewed on its own merits, listening to Charlie Anderson discussing the war with his family, we don't hear him speak against it because violence is wrong. We hear him rail against it because "it doesn't concern us." That may be a viable argument if you're discussing whether America should be trying to impose our way of life on an unwilling foreign land. It's not if the question on the table is whether your own neighbors, in your own country, should be allowed to buy and sell fellow human beings. The more often I see the movie, the more this isolation disturbs me.

And while the women (Katharine Ross and Rosemary Forsyth) in the cast are almost as genuine as Stewart and can be quite moving, the men are almost painful to watch. Doug McClure, Patrick Wayne, Denver Pyle ... They seem to have wandered over from the set of McClure's TV show, The Virginian. The Technicolor sets are definitely TV soundstage quality, as well.

And yet, and yet ... if Shenandoah came on right now, I'd watch it again. Stewart/Charlie has a scene at the end where he talks to his late wife, Martha, at her grave. He brings her up to date regarding their kids and their daughter-in-law, Ann ("You didn't know Ann, did you? Well, you'd like her, Martha.") and their grandchild and I mist up a bit. Maybe because the dialog is so sincere when he rails that only ones benefiting from the war are the undertakers, I can willfully ignore that he's talking about a sad but necessary conflict that brought about the emancipation of slaves and instead pretend he was talking about Vietnam or Iraq.

Now go visit The Girl with the White Parasol and read her take on Fascination Films. 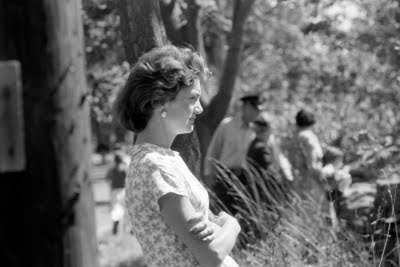 I love it when I discover a photo of my idol, JBKO, that I've never seen before. Judging by her hair and the print of her dress, by the fact that she doesn't seem very pregnant, and that she's not yet the center of everyone's attention, I'd put this at late 1959/early 1960. My guess is that it's fall/winter in Palm Beach, FL, and everyone is assembled at the Kennedy Palm Beach home listening to her then-Senator husband.

I keep hoping if I look hard enough and often enough, I'll unlock her secret and be able to be more like her. I especially like shots like this when she doesn't seem to know she's being observed. I know that's kinda creepy when you remember this woman -- unlike, say, Madonna -- never courted the spotlight. But there you go.

All I needed was a simple silver chain. Just something to hang the new charms -- Bruton Parish church and a tag for Colonial Williamsburg. I figured I'd just buy a necklace, slip off the existing pendant and replace it with mine.

Nordstrom Rack -- At last! (Cue the heavenly choir.) I had to break the crappy CZ pendant to replace it with my sweet old church, but that's ok because I had no intention of wearing it, anyway. (It was a gaudy little star.) Don't let the Nordstrom name mislead you. It was just over $21 with tax, more expensive certainly than Claire's but on par with Sears. And nicer. And I got out of the store before my hair went gray and my teeth fell out. (Geez, Sears! I tried to support you because you're an iconic American retailer, but yesterday sucked.)


I am happy. I love my souvenir. My talisman! When I finger it, I'll go back to the happy place.