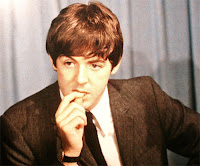 That's the June 18, 2017 headline in a German newspaper, honoring Sir Paul's big birthday. And I think it's great.

He's still out there, touring. Beginning next month he'll be performing in sold-out arenas across the US. This bears mentioning, because in the world of rock and pop, it's the martyrs that get celebrated. As it's been since Elvis,* die of drugs and suddenly your entire oeuvre is worth more.

Not today. Not on this gal's blog. We're applauding the survivor, celebrating The Hard Day's Knight.

After all we're talking about a man who:

•  holds the Guinness Book of World's Record title as best-selling recording artist of all time
•  wrote "Yesterday," the song that's been recorded by more different artists than any other
•  played to the largest paid audience of all time (Brazil, 1989)
•  has been awarded the Companion of Honor, an MBE and a knighthood by his Queen
•  raised four children with The Lovely Linda†
•  was married to Linda for nearly 30 years -- a notable feat, even for a couple who isn't in the public eye -- before she succumbed to cancer
•  has amassed a fortune estimated at $500 million; for a lad who grew up in public housing, this is a big fucking deal 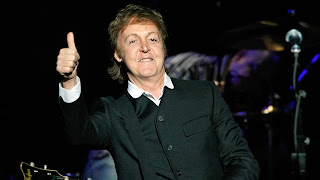 Those are just the metrics. Then there's the music. There's always the music. Everyone from PBS to Rolling Stone has commemorated the 50th anniversary of Sgt. Pepper, the most influential album of the rock era. When Roger Moore died in May, every newscast played "Live and Let Die."

"Maybe I'm Amazed." "My Love." "Band on the Run." "Jet." "Silly Love Songs." "Listen to What the Man Said." "Let 'Em In." "Coming Up." "Uncle Albert/Admiral Halsey." Those are just the solo hits. I could get writer's cramp trying to list all his Beatles songs.

I'm going to let The Birthday Boy have the last word. Listen to the lyrics. He can't seem to believe all he's accomplished, either.

The same me that stands here now
When I think that all this stuff
Can make a life that's pretty hard to take it in, that was me

He's really got a hold on me

I'm sure that, were we to meet, Jake Arrieta and I would not like one another. Politically it seems he's a RWNJ, not surprising for a Texan. And he seems to be pitching for himself this season -- looking ahead to free agency -- rather than for the team.

But dear God, I love watching him move. For reasons that are completely less than wholesome.

It's the fabulous body. It's the dollop of swagger.