Why I don't think Tiger is the worst athlete ever 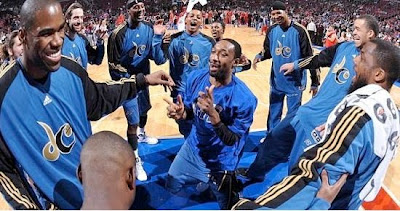 Today's sports pages are filled with players who do far worse than cheat on their wives. For example, Gilbert Arenas, who not only pulled a gun on a teammate in the lockerroom, he joked about the incident on national TV.

NEW YORK — Gilbert Arenas and Javaris Crittenton were suspended without pay for the remainder of the season Wednesday by NBA commissioner David Stern, who said guns in the workplace "will not be tolerated."

Stern delivered the punishment after meeting with Arenas earlier Wednesday, and with Crittenton a day before. Arenas already had been suspended indefinitely by Stern on Jan. 6.

Both players admitted bringing a gun or guns into the Washington Wizards’ locker room — a violation of the collective bargaining agreement — after a dispute stemming from a card game on a team flight. Stern said the players expressed remorse, but added, "nevertheless, there is no justification for their conduct."

Asked during a conference call what message the penalties sent, Stern said: "We mean what we say when we say that guns are prohibited from being in our buildings and on team business.

"You will be dealt with harshly because it’s very potentially dangerous to our players, to the other players and to anyone else who might be involved."

Arenas, who is forfeiting about $147,200 per game, had already been suspended indefinitely earlier this month. Crittenton, who met with Stern on Tuesday, will lose about $13,435 per game from his $1.48 million salary.

Arenas pleaded guilty Jan. 15 to a felony gun charge after a confrontation with Crittenton at the Verizon Center. Arenas, who is scheduled to be sentenced March 26, is in the second season of a six-year, $111 million contract.

The Wizards have 38 games left in a woeful season that was thrown into turmoil when news of the confrontation involving the guns broke on Christmas Eve. The team has distanced itself from Arenas since Stern indefinitely suspended him, removing his likeness from the Verizon Center. Crittenton has been injured and wasn’t playing, anyway.

"Their poor judgment has also violated the trust of our fans and stands in contrast to everything Abe Pollin stood for throughout his life," the Wizards said in a statement.

"It is widely known that Mr. Pollin took the extraordinary step of changing the team name from ‘Bullets’ to ‘Wizards’ in 1997 precisely to express his abhorrence of gun violence in our community. We hope that this negative situation can produce something positive by serving as a reminder that gun violence is a serious issue."

Piper Hall, a spokeswoman for Arenas’ lawyer, wrote in an e-mail to The Associated Press that neither Arenas nor his lawyer, Ken Wainstein, would comment "at this time."

Arenas, a three-time All-Star and once the face of the Wizards’ franchise, will miss the final 50 games of the season. Stern originally planned to follow his normal policy of waiting until the legal process was further along before acting, but handed down the initial suspension after Arenas joked about the gun situation on his Twitter page, then was photographed before a game in Philadelphia pointing his index fingers, as if they were guns, at his teammates.

"I felt that I should do something to keep Arenas from doing even further damage to himself and I told him that," Stern said. "We also try to protect (players) from doing things that are foolish and damaging. I felt that Gilbert was in the process of doing that and it was incumbent on me to stop it."

Stern said he would not advise the Wizards on how they should proceed if they sought to void the remainder of Arenas’ contract. Players’ association executive director Billy Hunter warned the union "will respond aggressively to any improper attempt by the team to impose additional penalties."

Stern said he and Hunter would meet in the coming weeks to perhaps build a stronger gun policy than the one in the collective bargaining agreement.
Posted by The Gal Herself at 1/28/2010 02:15:00 PM 1 comment: