1) Kelly Clarkson is singing an upbeat song about falling in love. Think of your favorite love song. Is it about finding love or losing it? I suppose it's advising a friend about how to keep love. My favorite lyric, "Pride can hurt you, too." Advice to take to heart.

2) This song was co-written by Kara DioGuardi, who was a judge on American Idol. Kelly was, of course, the first American Idol. Do you watch Idol, The Voice, or America's Got Talent? Only Idol. I didn't for a long time, but Harry and Keith are hot. I suppose I watch it more for the beefcake than for the music.

3) In this video, Kelly is blonde. Clairol based a famous ad campaign around the assertion that "blondes have more fun." Tell us another commercial catchphrase (it can be for any product at all). McDonald's "I'm lovin' it."

4) As a young girl, Kelly wanted to be a marine biologist. She jokes that she changed her mind after seeing Jaws. Tell us about a movie that really scared you. The Exorcist.

5) Kelly is very involved with NASCAR, performing at pre-race concerts and appearing at their Champions' Breakfast. Are you a race fan? Nope

6) Kelly is married to Brandon Blackstock, stepson of country superstar Reba McEntire. Are you a country music fan? Nope

7) The Blackstocks have a baby girl, River Rose. In May, the family visited an Australian wildlife preserve and introduced her to koalas and kangaroos. Have you visited the zoo this year? Not yet this summer. But I'm a big fan of Brookfield Zoo. They do such a wonderful job informing generations of us about our role in the environment and all that's at risk in the desert and the rainforest. They do it in a way that's fun, too, which is so important. Plus, of course, you gotta love the animals. If you're ever in Chicagoland, go, go, GO!

8) Upon learning that she was getting criticized on Twitter for being "big," Kelly responded, "Say what you will. It's a free world. It doesn't bother me." How about you? Do you worry what other people think of you? Of course I do. Everyone does. Although with time, I'm able to put it in perspective. I try to learn from constructive criticism and set aside snark.

9) She bid over $200,000 and won a ring that had once belonged to Jane Austen. (She doesn't have the ring, though; the British government banned its sale because it's a historic artifact and Kelly's money was returned.) She also has a first edition of one of Austen's novels. Who is your all-time favorite writer? As a big reader, this is a very hard question to answer. But I can narrow it down to two: Doris Kearns Goodwin, who makes history romantic and accessible, and Nora Ephron, who is the older sister I wish God had given me. Let's close with a wise and wonderful quote from her book, Heartburn.

“And then the dreams break into a million tiny pieces. The dream dies. Which leaves you with a choice: you can settle for reality, or you can go off, like a fool, and dream another dream.”

The crowd was warm, friendly and (reasonably) well managed. On the way out last night, the security guard for the turnstyle I exited through high-fived each and every one of us, saying, "See you tomorrow!" So I sensed no tension between authorities and audience.

The food was great. Like a mini Taste of Chicago. I met a new band. My nephew and I sat through Alabama Shakes' set because it was in the same spot where Sir Paul would be playing and we wanted good spots for him. But I loved Britney, their Janis Joplinesque lead singer. So that was cool.

It wasn't all great. I can't believe how DIRTY I was after my Lolla adventure. Even under my fingernails! And I'll never forget the porta potty (shudder). Trains were packed and noisy, the expressways were a parking lot. Of my 12 hour day, literally 4 hours of it was spent trying to get to and from Grant Park.

But I don't know what the City could have done better. That was a massive influx of people. It was more peaceful than I had expected.

And I gave my 15-year-old nephew bragging rights. You should have heard his swagger when he took a call from one of his buddies. "I can't talk now. I'm at Lollapalooza." He's a good kid and I'm happy I could give him this. 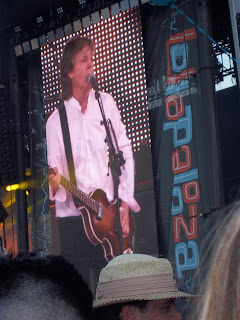 So I'm standing in Grant Park with 99,999 of my new best friends, waiting for Sir Paul at Lollapalooza. And I admit I'm a little worried. It's a young audience. I was by far the oldest person I could see. How would a 73 year old play to a massive crowd in their 20s and 30s?

Beautifully, thank you. It was during "Got to Get You into My Life" -- a song that was never released as a single when the Beatles were still together -- that I not only knew everything was going to be OK, I realized that my Paul is not really MY Paul and that he's going to be remembered long after I'm dust. For by the third song of his two hour (!) set, it hit me that everyone was singing along, enthusiastically. 100,000 of us were following him, phrase-for-phrase. This song was released 49 years ago.

The boy behind me (25, tops) kept screaming (in my ear), "PAUL! You're bad!" And every time Paul said "thank you," he shouted back, "Thank you, Paul! You're fucking awesome!" At one point he turned to his girlfriend and said with more than a little awe, "I'm seeing a Beatle." He knew which album every song was from, even the Wings and solo stuff. It would have gotten old (I mean, we were so close I could practically feel his breath on my neck) except I was genuinely moved. I told him I thought I was the world's biggest Macca fan, but he was my peer and I was happy to be there with him. He squeezed my shoulders affectionately. It was that kind of crowd.

His Lordship more than earned the audience love last night. He played a full set in the summer heat. Two hours without a break. The other bands played half that.