1) In this week's song, the Judds tell us they aren't impressed by diamonds or foreign travel. If you had your choice, would you prefer a $1,500 diamond pendant or a $1,500 voucher from United Airlines? The voucher! It would enable my oldest friend and I to take a girlfriends' trip or two. Of course, the more mature thing would be to hock the pendant and put the $900 toward my upcoming dental work. Yet this is a fantasy, so why worry about such mundane matters?

2) In the video for this song, the Judds are shown having fun on the beach. Do you have any trips to the beach planned for the upcoming summer months? No. To be completely honest, I'm not a big fan of the beach. If I end up there, I'll wade in and I'm sure I'll have a good time. But it's not something I seek out.
3) Early in their career, this mother-daughter duo performed in clubs venues around San Francisco, where they called themselves The Hillbilly Women. Have you recently been to a bar or restaurant with live music? No. In fact, I recently avoided being in a restaurant with live music! I was having dinner with friends at an Italian restaurant with great food but chose it because this was Friday and they have music on Thursdays and Sundays.Too loud for conversation
4) They moved to Nashville in 1979 in search of greater success. During the three years it took them to score a record contract, Naomi supported the family as a part-time nurse and occasional model. She enjoyed the flexibility so her schedule could accommodate auditions. Do you like having a pre-planned schedule? Or would you rather keep things loose? On my workdays, I like to know what to expect. In my personal life, I'd rather just let things unfold.
5) Wynona sang the Elvis classic "Burning Love" in 2002 Disney movie Lilo and Stitch. What's the most recent Disney movie you've seen? Good goobies! I truly don't recall! Though I did really enjoy Lilo and Stitch. Even extraterrestrial koala bears love Elvis.
6) In 2011, Wynona wrote her first novel, Restless Heart, about a country singer struggling with the price of fame. Have you ever tried your hand at writing fiction? Sure. It's fun. A busman's holiday, as they say. That doesn't mean I'm any good at it.

7) Kid sister Ashley Judd is the only woman in her immediate family to not change her first name. Naomi was born Diana, and Wynona was originally Christina. Do you like your first name? It's fine.
8) In 1988, the year this song was popular, Sonny Bono went from entertainer to politician when he was elected Mayor of Palm Springs. Have you met the mayor of your town? Nope.

9) Random question: Were you a member of the Columbia House Record Club? Yes! I loved it when those big packages arrived, filled with 12" LPs.

The Yankees are playing the White Sox Thursday-Sunday. So, in a shocking change of pace, I'm watching White Sox baseball this weekend. 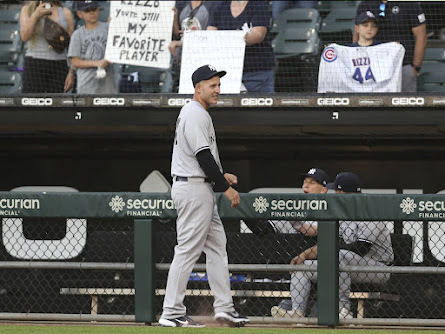 It was Yankee first baseman Anthony Rizzo's first game in Chicago since the Cubs so cruelly ripped him from me traded him. Here he is, warming up before the game, greeted by Cub fans who made the trek.

Earlier in the day, he stopped at the headquarters for his charity and signed autographs that will be sent to kids all over the country who are battling cancer. En route to the ballpark he stopped at his old favorite Italian sub shop. 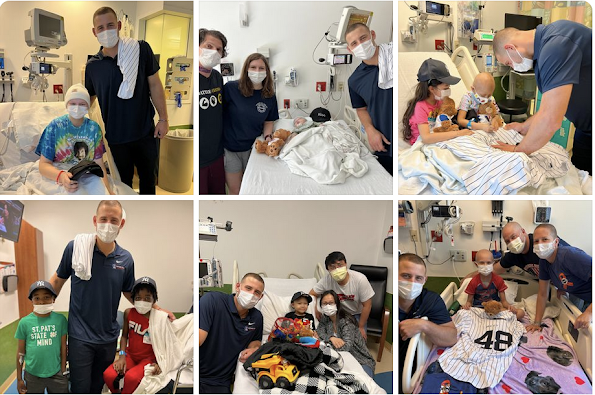 Today he went to Lurie Children's Hospital and visited the pediatric cancer ward. Cameras followed him everywhere. He is still our local hero. (Though Sox fans did boo him last night. Of course they did. Sox fans hate the Cubs so much that they are blind. You'd think they'd be happy that now that he's gone, he's hitting better than ever. Oh well ... Sox fans.)