It's always sunny in HoHoKam 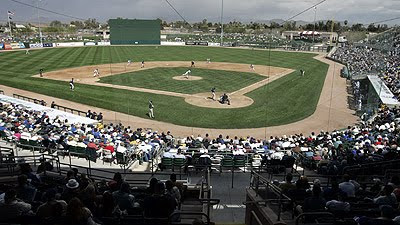 It's an overcast, damp, drab 43º day here in Chicago. But where my Cubs are playing, in Mesa, it's a sunny, breezy 73º. It doesn't matter that my heroes in pinstripes are kinda sucking today. I mean, it literally doesn't matter because this is only preseason play. And it's fun to hear baseball -- even sucky baseball -- after the long, cold, lonely winter without it.

I also had a dream about my beloved future Hall of Famer, Greg Maddux, last night. He's been in the news lately because he's been mentoring some of the younger Cub pitchers. I dreamed that I saw him walking around by the Chicago River, carrying a golf club and smoking a celebratory cigar after doing especially well in some golf competition. He gave me an autograph and I told him I loved him and he smiled in a self-deprecating way. Apparently my dream took place in the future because he signed it HOF (Hall of Fame) and he won't be eligible until 2014.
Posted by The Gal Herself at 3/09/2011 02:43:00 PM No comments:

I want to remember to "pay it forward." Last night I was carrying the box that contained my new air purifier. The package wasn't heavy but it was unwieldy (at least 20" tall and probably twice as wide), and I had an interesting time maneuvering it onto the train.

A young man (between 25 and 30) not only gave me his seat on the train, he insisted on helping me get it down the stairs. No kidding, he actually said, "I insist you let me take this on the stairs."

Small kindnesses like that don't feel so small to the person on the receiving end. I must remember that and do something similar for someone soon.
Posted by The Gal Herself at 3/09/2011 02:25:00 PM 3 comments: