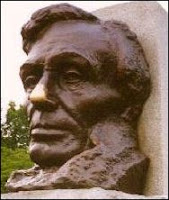 My nephew and I spent a day and a half in Springfield, getting to know Mr. Lincoln, Illinois' most famous citizen. (Sorry, Oprah!)

Friday we went to Lincoln's tomb. Like decades of visitors before us, we rubbed Abe's nose for luck. Inside we paid our respect to the great man and felt bad for the sad, long-suffering Mary. The tour guide gave us an overview of how Lincoln's body was nearly kidnapped.

Saturday morning, after a buffet breakfast that included a lot of bacon (my nephew loves bacon) we went on to Mary and Abraham's home. When they left for DC, they sold their furniture but kept the house because they completely meant to retire here. Neither of them ever set foot in here again. Mary could not confront the happy memories and all the loss (after all, by then she had not only lost her husband but two of the sons who had been born here). 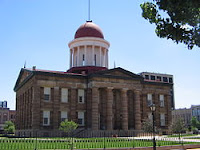 Then we toured The Old State Capital. Lincoln gave his famous "house divided" speech here. It's also the site where Barack Obama announced his historic run for the Presidency. My nephew seemed to think this one was a yawn, but I'm confident that when he's older he'll be glad we made this stop. I learned where the phrase "red tape" came from. Back in the 1800s, deeds and birth/wedding/death certificates, etc., were delivered to the state capitals in bunches wrapped first in red yarn and then, literally, in red tape. The document wasn't "official" until the "red tape" was cut and it was filed with the state. 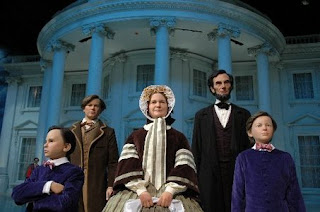 Last we went to the Lincoln Presidential Museum. It was an honor and a privilege to see The Gettysburg Address in the man's own hand. The museum is very interactive, very good for children and young people. If you look closely, you can see John Wilkes Booth hovering behind the Lincoln family. My nephew had a great time posing behind Booth and giving him devil horns. At 12, he's in that netherworld between kid and teen and, while reading and paying close attention to the exhibits, he had a childish habit of shuffling his feet in almost a little dance when he's lost in thought. While it amused me, I had to bust him. It wasn't really appropriate to do a Happy Dance when confronted with the death of toddler Eddie Lincoln or the controversy caused by The Emancipation Proclamation.

We also swam in the hotel pool and he ate his first cannoli. He liked the former but didn't think the latter lived up to its photo on the menu.

Even I didn't expect this! 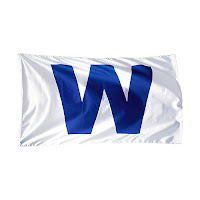 I'm always a Cub fan, win or lose. But it's easier when they win. Which they have actually been doing! They have reigned victorious for 7 of the last 10 games, with a winning streak of four in a row. I'm beginning to expect a happy outcome when I sit down to watch a game. How cool is that?

I just wish we weren't soon going to say goodbye to Ryan Dempster and maybe even Geovany Soto, two of my favorite players. It's almost as though the better they do, they sooner they will leave, and that makes me a little sad.