Have you ever demolished a wall or building? Nope

If you and a friend both wanted the same thing would you let the friend get it first? Depends on what the thing is.

Have you ever argued over who should pay for something? Yes. If it's under $5, I get annoyed by even having the conversation.

Do you have any family heirlooms? A ceramic cable car that belonged to my favorite grandfather. It was on his dresser and he used it to hold his cufflinks, tie clasps and licorice throat lozenges. Every time I look at it, I can almost smell the licorice.

Are you related or distantly related to anyone famous? No

What's your favorite ocean? The Atlantic

Do you correct peoples mistakes? You mean, "peoples' mistakes."

Have you ever helped out an injured animal? Not injured. But I have cared for sick animals.

Do you throw bread for the ducks? No, because there aren't any ducks around here.

Do you think babies are little bundles of joy or smelly noisy things? I believe they can be both.

Do you give money to buskers? I have

Do you ever forward or reply to chain mails? I can't recall the last time I received one.

Do you often have a tune in your head you can't name? No

Has anyone ever approached you thinking you were someone else? Yes. There's a man in town here who has twice insisted I'm Kelly, the school friend of his second daughter. If he does it a third time, I'll just tell him he's right, I'm Kelly.

Have you ever starred in an amateur or professional video? No

Have you ever been in a position of authority? Yes. Since I have trouble with authority, it was an awkward experience.

If you were ruler of your own country what would you call it? Galtopia 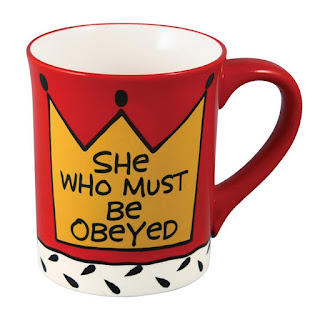 And what title would you give yourself? She Who Must Be Obeyed

If you invented a monster what would you call it? FrankenGal

And what features would it have? She would have superhuman strength and an inexhaustible ability to open jars, scrub tubs and sinks and repair things.

Joey and I visited the vet this morning. Except for arthritis and mild hypertension, Joe is in "fine shape" for a cat of his advanced years. I'm so happy and relieved!

Last November he was so sick, I really thought I was going to lose the big guy. Cats of his age are susceptible to diabetes and cancer. But he came through that illness like a champ and has been lively (by 20 year old standards) and affectionate.

I am lucky to have Joe in my life. I'm grateful for him every day, but especially today.

If you want to play along, just come back here (meaning to this blog, not this individual post) each day in August, looking for the happy chocolate cone. Every day I will try to have a post with the headline: August Happiness Challenge: Day [X]. Leave a comment and then post your own daily happiness, with August Happiness Challenge in the title to make it easy to find.
Posted by The Gal Herself at 8/08/2015 09:43:00 PM 1 comment:

1) In this song, Denver sings that he was "born in the summer of his 27th year," because that's when he discovered the place where he felt most at home. What do you remember about your 27th year? (If it hasn't happened yet, what do you want to happen when you're 27?) I had just started my second advertising job, was living in a tiny apartment, volunteering at the local animal shelter and building a wonderful and enduring circle of friends. The only dark cloud on the horizon was the guy I was involved with. It was an unhealthy relationship. Looking back, I can't believe I wasted my 20s on him.

3) John Denver was a dedicated environmentalist who wrote an anthem about Earth Day. Are you careful about your energy consumption? Do you recycle? I'm a good little recycler. I could be better about the lights. According to the local energy company, I used 3% less power than I did last July.

4) 1975 is also the year that Denver released a collection of holiday songs called Rocky Mountain Christmas. On this August day, what's the first carol that comes to mind? "I'll have a Blue Christmas without you ..."

5) Denver dabbled in photography in his spare time and friends say he was quite good. Tell us about your hobbies. I read a lot, watch a lot of TV/movies and since it's summer, much of my attention is focused on this place:

6) In 1975, when this song was popular, mood rings were all the rage. It was said that the ring reflected the wearer's mood. Black = anxious/stressed, orange = worried, green = normal, blue = happy, pink = as good as it gets. As you respond to this week's Saturday 9, what color would your mood ring be? Green. I'm feeling very "normal."

7) Pet Rocks were 1975's other odd cultural phenomenon. Do you have any real-life, breathing pets? Three cats: Joey (who has a vet appointment this morning), Reynaldo, and Connie

8) 1975 saw the premiere of Wheel of Fortune. Are you good at word puzzles? Yes

9) Random question: Did you sleep well last night? It was OK.