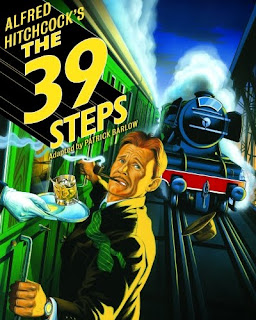 My theater buddy, Barb, and I went to see The 39 Steps at the Bank of America Theater. I enjoyed it -- in an absurd, Monty Python kinda way. She looked so bored I wondered if it hurt. Still, she was a good sport about it and stayed through the final curtain.

She was also a good sport about American Idol. While I was happy to see her and catch up, and was genuinely amused by the live performance and was glad to be back in my favorite theater,* I was sorry that the Idol results were being announced just as intermission was ending. Barb was proud of her dexterity on her iPhone and was able to confirm that yes, the final two are Crystal Bowersox and Lee DeWyze.

He still likes me. He still really likes me!

An invitation came in today's mail. My presence is requested at the graduation party of the youngest son of an old boyfriend.

His dad and I dated, and broke up, back in 1981. I was never really IN that relationship, never really gave it a chance. Were I to have been honest with myself -- and in those days, that wasn't one of my strengths -- I would have admitted that I was just biding my time until the guy I really wanted became available. (And, to my everlasting regret, he did and we began a tumultuous relationship that haunts me to this day.)

Even if I had been willing to dive in with both feet, I know he would never have this happy life with me. I could never be content as a mother of 4, working from home in a suburb somewhere in Wisconsin. So these things do work out just the way they're supposed to.

But still, it means the world to me that Dad still thinks to include me in moments like this. He was, and remains, a genuinely good guy and his esteem means a lot to me. I'm sending his son a $25 Border's gift card, and my regrets to his wife. But even though I won't be at the party, I feel like a part of the day.
Posted by The Gal Herself at 5/19/2010 03:00:00 PM 2 comments:

If I had the time and discipline, I would want to learn Spanish. While I don't approve of the situation, this country is becoming bi-lingual. Plus, my friend in the Keys teaches Spanish, and I think it would please him to keep my newly-learned skills sharp by conversing with me in his native tongue.