"More exceptional in every way than you know" 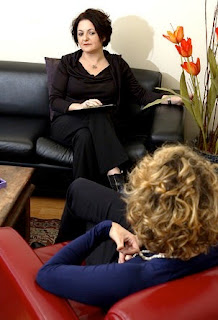 Gulp. That's how my shrink described me as I was walking out the door at the end of our final office session.

It began as a pretty ordinary session. I told her I needed new coping mechanisms. My officemate plays the ukulele at her desk, just feet away from me. When she's not annoying me, she's insulting me ("You couldn't be on What Not to Wear. You don't dress badly enough."). My oldest friend decided we were spending a week together this summer -- in August, Chicagoland's hottest and most hellacioius month -- even though this is not when I want to take off and it's not how I want to spend my time and money. My friend John had us traipsing up and down Randolph Street in search of the "right" place to have a burger and a beer -- even though we passed some perfectly adequate bars and restaurants. It all annoys me. I'm annoyed a good portion of my day. I wake up annoyed, I go to sleep annoyed. How can I dis-annoy myself?

She told me that maybe I'm annoyed not because my reactions are outsized but because the people around me have been annoying. Maybe the problem is the way I'm being treated. I so hate bullies and bullying that I often let people who appear weak and vulnerable get the better of me, and then I'm willing to blame myself completely for the situation. She told me other people's chaotic lives don't entitle them to disregard my feelings.

Then it was time for us to end. Our last session was over. She gave me her cell phone number and told me that within about a month -- after she's settled in her new home/office -- to see if I want to schedule a phone consult.

And then she said it. She's confident I'll be fine because I'm "more exceptional in every way" than I know. Wow.

This all feels very big and important. I just wanted to get it all down. I'll process it some other time.