13 successful people who once worked at McDonald's. In honor of Labor Day, let's look at some famous names who clocked time at the fryer and drive-through window. 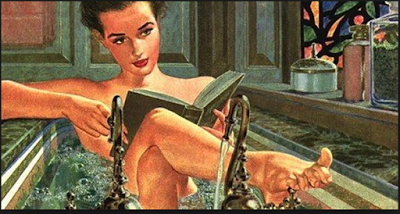 To participate, and to see how other book lovers responded, click here.
WWW. WEDNESDAY asks three questions to prompt you to speak bookishly.

1. What are you currently reading? Dog Tags by David Rosenfelt. Milo, a highly trained police dog, is retired by the force for being too old. He is given to Billy, his former partner who was injured in Iraq. Together the two unemployed ex-cops embark on a life of crime, supporting themselves by committing petty thefts. Of course, Milo has no idea what he's doing is wrong. He's a dog who loves his master and willingly follows his commands. One of their capers goes horribly wrong and someone is killed. Billy ends up in jail and Milo is in police custody.

Lawyer Andy Carpenter likes dogs better than people and donates his services to freeing Milo. Yes, he goes to court in an attempt to get Milo released on bail. So far, his legal maneuvers on Milo's behalf are my favorite part of the book. Everyone he encounters along the way, including the judge to the DA, is amused by how seriously Andy takes freeing this dog. You'll be amused by Andy's quick wit. (He has what my dad would call "a smart mouth.")

The more Andy learns about the shooting, the more complicated it becomes, and the deeper he is drawn in. He ends up defending Billy on a murder charge, and finds the forces Billy is facing are far darker than he imagined.

2. What did you just finish reading?  Too Much and Never Enough by Mary L. Trump. Donald Trump has one niece, his older brother Fred's daughter. She puts her uncle in the context of their family. A trained psychologist, Mary explains the Trump clan and their motivations, and it's chilling.

Patriarch Fred Trump Sr. is really at the center of this book. Successful, smart and morally bankrupt, he bullied his wife and children and taught them that might makes right. Money was worshiped, kindness and sensitivity were mocked in that household. Donald Trump became what his father wanted him to be and in time, the student surpassed the teacher.

Just as Donald Trump makes Richard Nixon look better as a President, Fred Trump elevates Joseph P. Kennedy in the presidential parent ranking. Yes, JPK was a ruthlessly ambitious businessman and a unrepentant womanizer. But he loved his children and pushed them because he believed they were exceptional. There is very little love or faith in the Trump family saga.

A very readable but terribly sad book. As I hear about the criminal shenanigans at Mar-a-Lago, Trump's motivations make more sense now, but that doesn't make them any less heinous.