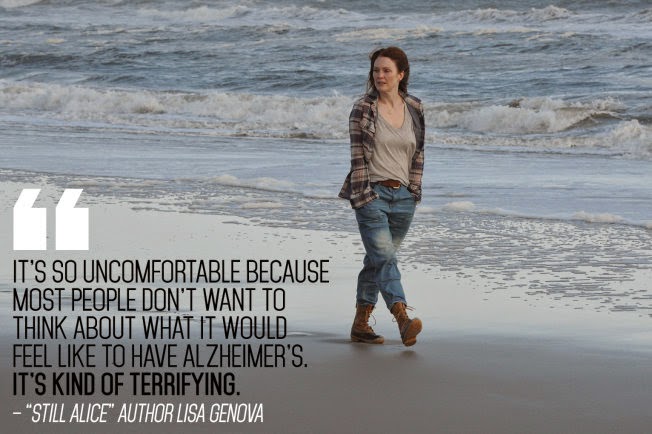 I saw Still Alice over a week ago and it's still haunting me. The tragedy of a vibrant, intelligent woman descending into Alzheimer's, and Julianne Moore's virtuoso performance, had a serious impact on this old gal.

I keep thinking about my late uncle, whom I loved a great deal. He was handsome and athletic and proud of what his body could do -- he was an excellent shot, could run marathons, downhill skied, and was a lion with the ladies. Then Parkinson's Disease captured him and he lost it all. First he had trouble with his eyes and blinked incessantly. Then his arms would spasm. Eventually it was impossible for him to control his back and spine so he couldn't sit in a chair. Finally he had trouble making himself swallow. He died in his sleep the night before the doctors were going to surgically insert a feeding tube.

I'd say it was painful to watch, except that reeks of self pity when I think of how he struggled.

The Alice of the movie had the equal but opposite predicament. Her body stayed lean and strong but her mind slipped away.

Which is worse? To be awake and aware but lose your body? Or to feel your mind slipping away?

I wish my uncle was here. For countless reasons. I want to know his reaction to Still Alice. I want to thank him for all the magic he brought to my life. And I want to tell him I love him. I'm not sure ever did. I have been thinking about it a lot, and I don't recall ever saying those three words to him.

My home sits by the train tracks. Since I saw Still Alice, I've seen two different freight trains carrying John Deere tractors. My uncle collected John Deere memorabilia. I take it as a sign that he knows I'm thinking of him.

That he knows and he understands.